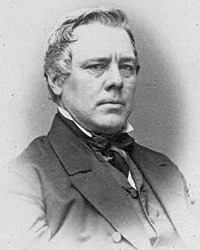 Brooklyn Congressman Moses F. Odell’s service in Washington coincided with the Civil War. He had the distinction of being the token Democratic House member of Joint Committee on Conduct of War. “Although Odell did not always agree with his Republican colleagues, they appreciated his hard work and dedication to the committee’s investigations,” wrote historian Bruce Tap.1
Historian T. Harry Williams wrote, “Next to [Massachusetts Congressman Daniel] Gooch and [Ohio Senator Benjamin] Wade, he was the most diligent worker on the Committee. He had held various appointive offices under Democratic presidents and in 1860, with the backing of city merchants, he won a seat in Congress. When the Southern states seceded, he denounced their action. He told a soldier audience in Brooklyn that his only loyalty was to the government, and that he would support the administration in its efforts to subdue the rebellion. This speech led the radicals to place him on the Committee. He was fiercely hostile to [George B.]McClellan because the general consorted daily at his headquarters with the leaders of the Peace Democracy. These gatherings, charged Odell, were a ‘continuing caucus for the consideration of plans of resistance to all measures which proposed to strengthen the army or the navy…and to devise means of embarrassing the government by constitutional quibbles and legal subtleties.’ When Odell signed the Committee’s 1863 report which branded McClellan as a treasonable incompetent, the indignant Brooklyn Democrats read him out of the party.”2
Historian Bruce Tap wrote that the report of the war oversight committee “created a stir in the nation’s newspapers. Although reports on Bull Run, Ball’s Bluff, and [John C.] Fremont’s administration of the West were also released, the operations of the Army of the Potomac drew the most attention. It was signed by every member of the committee, including Democrat Odell. ‘Had the success of the Army of the Potomac during this period corresponded with success of our arms in other parts of the country,’ the report stated, ‘there is reason to believe that the termination of the campaign of 1862 would have seen the rebellion well-nigh, if not entirely, overthrown.’ George McClellan was responsible for this lack of success. Given credit for nothing, McClellan was systematically blamed for every setback in army operations. It was McClellan who had who had delayed the advance of the army in winter 1861-1862; it was McClellan who had dreamed up the ill-advised Peninsula campaign, left the capital undermanned, and then squandered repeated opportunities because of his own caution and constant exaggeration of enemy strength. And it was McClellan’s tardiness that caused Pope to fail at Second Bull Run and allowed Lee to escape after the battle of Antietam. If the general had achieved anything positive, it was not mentioned in this report.”3
As a War Democrat, Odell was welcome at the White House. Odell allegedly asked President Lincoln if he had actually suggested sending the brand of whiskey allegedly drunk by General Ulysses S. Grant to other Union generals. “No that is too good for me,” Mr. Lincoln reportedly said of the joke.”4 On another occasion, according to Lincoln chronicler Francis Fisher Browne, Odell was present when President Lincoln learned of mistreatment and starvation of Union prisoners held by the Confederacy. When it was suggested that the Union should retaliate against Confederate prisoners, Mr. Lincoln said: “I can never, never starve men like that! Whatever others may say or do, I never can, and I never will, be accessory to such treatment of human beings!”5 Artist Francis B. Carpenter wrote:

One bright morning in May, the Sunday-school children of the city of Washington, marching in procession on anniversary day, passed in review through the portico on the north side of the White House. The President stood at the open window above the door, responding with a smile and a bow to the lusty cheers of the little folks as they passed. Hon. Mr. Odell, of Brooklyn, with one or two other gentlemen, stood by his side as I joined the group. It was a beautiful sight; the rosy-cheeked boys and girls, in their ‘Sunday’s best,’ with banners and flowers, all intent upon seeing the President, and as they caught sight of his tall, figure, cheering as if their very lives depended upon it.6

In 1864 Odell got caught up in the corruption case of New York Evening Post co-owner Isaac Henderson, a member of Odell’s Methodist church in Brooklyn. Navy Secretary Gideon Welles wrote in March 1864 that Gustavus Fox, Senator Grimes and Congressman Odell came “to me about 2 P.M. and represent the papers in O.’s possession as disclosing a terrible state of things. Odell and Gooch told me on Thursday that they had examined the books and papers seized, and that they showed fraud and villainy such as had never been known, and urged the arrest of Keeler, Koons, and others. Brown the Navy Agent here, and Henderson in New York, they say, implicated.”7
Welles wrote again in his diary in June 1864 that Henderson’s “representative, and friend, and fellow church-member Odell has looked into the subject and says he has committed great frauds.8 A week later, Welles wrote: “I have a very earnest letter to-day from William C. Bryant in behalf of his partner and publisher, Henderson. It was handed to me by Mr. [Moses] Odell, Representative from Brooklyn, and inclosed was also an open letter to the President, which he wished me to deliver. Mr. O. is, like H., a prominent member of the Methodist Church. They are of opposite politics. Of course Mr. H. stimulated Mr. B. to write these letters, and, having got them, sends them through his religious associate. Mr. B. evidently believes H. innocent and injured. This is natural. Odell knows he is not.”9
Commented Bryant biographer Charles Brown, “Smarting under the Evening Post‘s attacks against the administration, although the Navy Department had fared better than most other departments, Welles was somewhat put out by Bryant’s letter…He mentioned that former governor Edwin D. Morgan believed both Bryant and Godwin were ‘participants in the plunder of Henderson’ but expressed doubts about Bryant, ‘who is feeling very badly, and thinks there is a conspiracy in which Seward and Thurlow Weed are chiefs.’ Welles could and should easily have disregarded Morgan’s opinion, since as governor he had been linked with Weed in the Evening Post‘s assaults on the flagrantly corrupt legislature of 1869-1860.”10
Later that year, Odell involved himself in the problems of another Brooklyn resident – a journalist who had been imprisoned for his role in tricking the New York World and Journal of Commerce into print a phoney presidential proclamation. The influence of the Rev. Henry Ward Beecher had already been used to release the other man responsible for the fraud, Joseph A. Howard. “Mr [Francis] Mallison is a poor man without friends or influence. Has an old mother entirely helpless, dependant upon him for support,” wrote Odell to President Lincoln in September 1864 after apparently meeting with him. “As I said to you Howard was the chief sinner, as he is in the enjoyment of liberty[.] All classes of our citizens feel it would only be just that the minor sinner should be released.” Within two weeks, Mallison was also freed on a presidential order.11
After the war, Odell was himself appointed Naval Agent for New York. When Mrs. Lincoln ran into financial trouble after her husband’s murder, she advised one financial agent to “go to Moses F. Odell” for his help in paying her bills.12
Footnotes
Visit