View of the Funeral Car Containing the Remains of President Lincoln 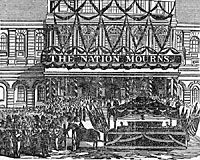 View of City Hall, with hearse bearing the remains of President Lincoln

Arrival of Casket at City Hall 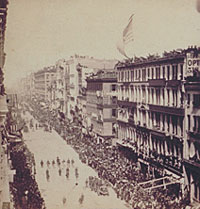 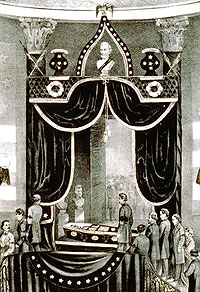 The body of the Martyr President, Abraham Lincoln: Lying in State at the city hall, N.Y.

Arrival of the Remains at Debrosses Street Ferry

View of the City Hall

President Lincoln’s Funeral – Removal of the Body from the City Hall to the Funeral Car, New York, April 25, 1865 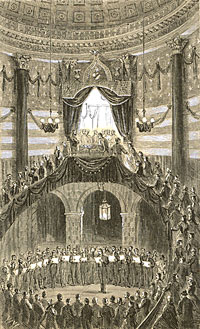 Dome of the City Hall, Scene at Midnight

Departure of the Remains

Interior of the President’s Funeral Car, with the Coffin and Guard of Honor

The grieving in New York City for President Lincoln began immediately on the day of his death, April 15, 1865. Crepe sprung from windows all across the city. Citizens gathered on Wall and Broad Streets in downtown. There was a mass meeting at the New York City Customs House where Maine Senator William P. Fessenden, former New York Senator Daniel L. Dickinson, and Generals Benjamin Butler and James Garfield spoke. Attorney George Templeton Strong wrote in diary: “What a day it has been! Excitement and suspension of business even more general than on the 3rd instant. Tone of feeling very like that of four years ago when the news came of Sumter. This atrocity has invigorated national feeling in the same way, almost in the same degree. People who pitied our misguided brethren yesterday.”1

At four o’clock, on the morning of the 24th of April, the funeral train took its departure for New York. Marching in solemn sate through the crowds of people, which seemed to line the track all along the route, it reached Jersey City, opposite New York, and passed into the spacious depot, which had been clad in mourning, to the music of a funeral dirge, executed by a choir of seventy singers, and under the roar of heavy and loud artillery. The coffin was lifted from the car and borne on the shoulders of ten stalwart veterans followed by a procession of conspicuous officials, marching to the music of ‘Rest in the Grave,’ sung by the choral societies, to the hearse prepared for its reception.10

According to biographer Carl Sandburg wrote: “Chauncey M. Depew, secretary of state for New York, in behalf of the unavoidably absent Governor Reuben E. Fenton, for the Empire State formally received the body from Governor [Joel] Parker of New Jersey. Ten stalwart sergeants carried the casket to a hearse which moved through street crowds to the ferry house. The paint was fresh on a legend here reading ‘George Washington, the Father: Abraham Lincoln, the Saviour, of His Country.’ The ferryboat Jersey City moved across the Hudson River, her pilothouse and cabins in scrape, flags at half-mast. As she neared the wharf at Desbrosses Street, the German choral society gave a funeral ode from the first book of Horace.”11 Also aboard the ferryboat were Mayor C. Godfrey Gunther and leaders of the City Council.
The arrival of the martyred President’s body in New York City was met with profound respect. “Perhaps it was the unusual scene enacted before them; perhaps it was the touching requiem being sung; or perhaps it was the sudden guns that prompted every man to bare his head as if obeying an order,” wrote Victor Searcher in Farewell to Lincoln. “Ladies burst into tears. A few boys, entranced by the otherworldly proceedings, failed to remove their caps, and received an unexpected punch in the nose for their lack of manners.”12
The New York Times‘ Henry J. Raymond wrote that “the hearse, drawn by six gray horses, heavily draped in black, took its place in the procession, headed by General [John A.] Dix and other officers, escorted by the Seventh Regiment, and the whole cortege moved, through densely crowded streets and amidst the most impressive display of public and private grief, to the City Hall.”13 The glass hearse itself was festooned with eight plumes of white and black feathers. It followed along Desbrosses Street to Canal Street, where it turned down Broadway to City Hall. Historian Victor Searcher noted that “Nearly everyone exhibited some emblem of respect and grief; either a band of black crape around the upper left sleeve or hat, or a special mourning badge such as were being sold by street vendors.”14
Lincoln chronicler Lloyd Lewis wrote: “It was the greatest sight New York had even seen: one hundred and sixty thousand persons, most of them in organized groups, marched in the parade, each group vying with the others for the happiest manifestation of woe. Cleverness collaborated with invention to devise spectacular floats, impressive mottoes, lavish effects. Lodges, labor unions, commercial bodies, sought to outdo each other like so many Mardi Gras clubs or ‘mummers’ societies.'” Lewis wrote of the procession which included about 20 bands:

The New York Caulkers Association, one thousand strong, bore an obelisk with the motto “The Darkest Hour in History.” Longshoreman’s Union No. 2 carried a mammoth sign “In Memory of departed Worth,” the New York and Brooklyn Sawyers displayed a banner reading ‘We Mourn Our Loss.” The Henry Clay Debating Society, the German Bakers, the Turner Sharpshooters, the German Carvers, Hose Companies galore, Temperance Cadets, women’s clubs, all were in line hoisting mottoes. The children of Brooklyn’s Fifth Ward waved the legend ‘The hand of the assassin has entwined the name of Abraham Lincoln in a wreath of immortality.” 15

Up the Hudson River east bank on the night of April 25 chugged the locomotive named Union, with its train of seven cars. On every mile of the route to Albany those on the train could see bonfires and torches, could hear bells and cannon and guns, could see forms of people and white sorry faces. ‘Yonkers Mourns with the Nation’ read one craped flag, women near by waving their handkerchiefs while tears ran down their cheeks. At the little station of Irvington with its draped inscriptions — ‘The Honored Dead’ and ‘We Mourn the Nation’s Loss’ — were seven thousand persons. At Tarrytown American flags arched over the railroad track, and under a flowered dome of flags and black velvet stood twenty-four young women gowned in white. At Sing Sing the burial car with its coffin again passed through a tall arch of flags crossed with black velvet. Amid long dark ranks of people stood a woman personating the Goddess of Liberty, white-robed with a chaplet of evergreens about her neck, near her the legend ‘He Died for Truth, Justice and Mercy.” At Peekskill, encircled with roses and tasseled red-white-and-blue, was a tall portrait of Lincoln. Firemen and a company of Highland Grays with drooped flags marched before a large crowd. At Garrison’s Landing, opposite the West Point military academy, were assembled the academy staff and professors — and a thousand precise and caped cadets. At Cold Spring again was a young woman in the semblance of the Goddess of Liberty, her face black-veiled, at her right a kneeling boy soldier, at her left a sailor boy kneeling. Fishkill evergreened its motto ‘In God We Trust,’ crowded both sides of the track; across the Hudson River General George Washington’s revolutionary headquarters had flags with mourning signs. Here too were delegations from Newburgh, New Paltz, and other parts of the apple country immediately across the river.37

The thing had become half circus, half heartbreak.
Now the train ran under arches of evergreens and flowers. Now committees of ladies watched the blossoms on the casket to snatch them away at the first sign of wilting and to replace them with fresh bouquets from the tumbling piles of flowers which showered into the rooms and the train. At every stop now delegations of thirty-six town belles in white, with black scarfs over the left shoulder, bore onto the train flowers and flags, spoke, sang, wept, recited tributes, enacted little dialogues and departed leaving morbid mottoes; the thirty-six girls representing the thirty-six States of the Union. When the train could not stop, the thirty-six belles could be seen kneeling in the station under torchlights. Hills were studded with arches, signs, mock graves, tableaus. In the dawn, country children waved flags at the train. At the coffin mothers twisted babies downward so that their eyes might focus on the dead face. Under the flambeaus late at night children could be seen opening sleepy eyes as parents shook them, anxious that they should remember always the sight of the funeral train.
At 4 P.M. Palatine Bridge was passed, and from the windows the party saw a white cross on a green mound, banked in evergreens and on each side a woman, apparently weeping. On the cross was inscribed, ‘We have prayed for you; now we can only weep.’ Coming into Syracuse, the cortège ran between rows of transplanted evergreens, and the station was ringing with choirs. All night the train was illumined by bonfires along the right of way.
Rarely after it left New York was the coffin outside the sound of booming guns.
The engine ‘Dean Richmond’ pulled the train into Buffalo Thursday morning, two flags over its headlight and above the cow-catcher two large portraits of Lincoln. It was seven in the morning when the brakes ground to a standstill; Buffalo was jammed. In the reception committee was ex-President [Millard] Fillmore, who had been jeered twelve days before because he had not decorated his home with mourning. Under a great tent in the town hall the coffin was laid, a gigantic chandelier lighting the dead man’s face. Ladies entered by one door, gentlemen by another and the sexes filed by with the coffin between.48

Associated Press correspondent Lawrence A. Gobright wrote: “Much of our traveling was at night, throughout which, no matter at what hour, crowds gathered on the roads to see the train on its onward progress; and whenever we halted, flowers were brought into the funeral car, and placed upon the coffin by the delicate hands which had culled them for this purpose. It would have been impossible to render greater honors to any mortal remains.”49 White House aide Thomas Pendel recalled: “We next stopped in Buffalo, where we had the usual procession. The building in which his body was placed was guarded by members of the Continental Guard, in old Continental uniforms, who kept watch all through the night.”50 For 11 hours, New Yorkers filed past the President’s casket. General John A. Dix commented that Buffalo’s “arrangements were far ahead of anything which had been attempted in any other place through which they had passed.”51 The editor of the Buffalo Express observed: “The thought would arise as we gazed upon his quiet smile that he had found the rest for which he must have so often sighed.”52
Footnotes
Visit