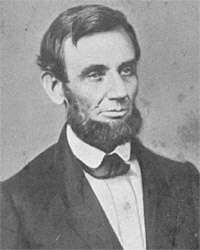 After turning north from Pennsylvania into New York, the President’s party made a stop at Dunkirk, where, according to John Hay: “at the conclusion of a brief speech, Mr. Lincoln, placing his hand upon a flag staff from which the stars and stripes waved, said, ‘I stand by the flag of the Union, and all I ask of you is that you stand by me as long as I stand by it.’ It is impossible to describe the applause and the acclamation with which this Jacksonian peroration was greeted. The arches of the depot echoed and re-echoed with the ring of countless cheers. Men swung their hats wildly, women waved their handkerchiefs, and, as the train moved on, the crowd, animated by a common impulse, followed, as if they intended to keep it company to the next station. Inside the cars the enthusiasm created by the conclusion of the speech was scarcely less than the outside assemblage had exhibited. The company evinced a general disposition to intone hurrahs and sing hurrahs and sing patriotic songs out of tune.”1
The Lincoln train made a more celebrated stop at Westfield, where he was greeted by a banner: “Welcome Abraham Lincoln to the Empire State.” Villard reported: “At the North East Station Mr. Lincoln took occasion to state that during the campaign he had received a letter from a young girl of this place [Erie] in which he was kindly admonished to do certain things, and among others to let his whiskers grow, and that, as he had acted on that piece of advice he would now be glad to welcome his fair correspondent if she was among the crowd. In response to the call a lassie made her way through the crowd, was helped to the platform and kissed by the President.”2
Grace Bedell became famous in Lincoln lure as the girl who written candidate Lincoln in October 15, 1860: “My father has just home from the fair and brought home your picture and Mr. Hamlin’s I am little girl only eleven years old, but want you should be President of the United States very much so I hope you wont think me very bold to write to such a great man as you are. Have you any little girls about as large as I am if so give them my love and tell her to write to me if you cannot answer this letter. I have got 4 brother’s [sic] and part of them will vote for you any way and if you will let your whiskers grow I will try and get the rest of them to vote for you,” Grace wrote. She added that “you would look a great deal better for your face is so thin. All the ladies like whiskers and they would tease their husband’s [sic] to vote for you and then you would be President. My father is a going to vote for you and if I was a man I would vote for you to but I will try and get every one to vote for you that I can I think that rail fence around your picture makes it look very pretty I have got a little baby sister she is nine weeks old and is just as cunning as can be.”3
President Lincoln had replied: “I regret the necessity of saying I have no daughters. I have three sons – one seventeen, one nine, and one seven years of age. They, with their mother, constitute my whole family. As to the whiskers, having never worn any, do you not think people would call it a piece of silly affection if I were to begin it now?”4 In his Westfield remarks, President-elect quickly brought up his hairy interchange with Grace:

I am glad to see you; I suppose you are to see me; but I certainly think I have the best of the bargain. (Applause.) Some three months ago, I received a letter from a young lady here; it was a very pretty letter, and she advised me to let my whiskers grow, as it would improve my personal appearance; acting partly upon her suggestion, I have done so; and now, if she is here, I would like to see her; I think her name was Miss BARLLY. A small boy, mounted on a post, with his mouth and eyes both wide open, cried out, “there she is, Mr. LINCOLN,” pointing to a beautiful girl, with black eyes, who was blushing all over her fair face. The President left the car, and the crowd making way for him, he reached her, and gave her several hearty kisses, and amid the yells of delight from the excited crowd, he bade her good-bye, and on we rushed.5

“Dunkirk was the terminus at Lake Erie of the railroad that reached across the southern part of the state from New York City,” wrote Victor Searcher. “Here a great triumphal arch had been erected, emblazoned with Union mottoes. Greeting the President-elect were military companies and military music and fifteen thousand citizens, a good share of Chautauqua County. Lincoln stepped from the train onto a platform. Placing a hand around a pole from the top of which the national colors stood straight in the breeze, he said: ‘Standing as I do with my hand upon this staff, and under the folds of the American flag, I ask you to stand by me so long as I stand by it!'”6