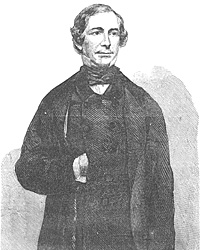 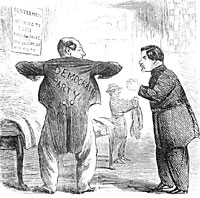 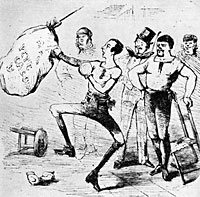 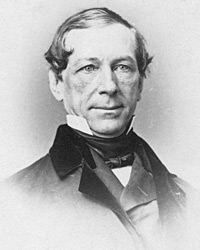 The ultra radical, abolitionists of this state persistently represent me as hostile to your administration, and as in sympathy with the states in rebellion against the government I sincerely hope these allegations (false in every respect) will have no influence upon your generous mind
They originated with the Tribune of this city and are continued by its coworkers in destruction
You cannot have forgotten my very early tender of services to you and your autographic reply, and I ask you to rely upon my support in your efforts to maintain the integrity of the union”32

Wood, however, was always on the lookout for political advantage. By the fall of 1862, Wood was proclaiming that the federal government was “imbecile, venal and corrupt” or it would have succeeded in crushing the Confederate forces. He told one Democratic audience that “I am going to Washington, and when I reach there I will go to the President of the United States, in my sovereign capacity as your representative,…I will tell him that without we have a change of measures, that so help me God! we will have a change of men.”33
Wood actually was trying to bring a change in policy — in his own bizarre way. “On the question of peace, and of the return of the Southern states to the Union, he wrote challenging letters to Lincoln, worrying the President with nagging demands that the President’s own letters, meant to be confidential, should be published,” wrote historian James G. Randall.34 “A passing flurry of peace talk gave the closing weeks of 1862 a bizarre touch,” wrote Historian Allan Nevins. Once again, Wood made an unorthodox proposal. “It was started by a Marylander named Chase Barney, who came home from a sojourn in Richmond with what he pretended were Southern proffers of terms for returning to the Union. The mischievous Fernando Wood shortly made a New York Speech outlining these supposed terms. They included, he said, the restoration of the old Constitution unchanged, adoption of the Crittenden Compromise, assumption of the Confederate debt, and ejection of the French from Mexico, to be followed by the annexation of that country to make nine slave States. Having made this preposterous statement, Wood maneuvered to bring about an exchange of views with Lincoln.”35
Wood’s impudence was part of his standard operating procedure. “In the latter part of 1862 [Wood] addressed to Mr. Lincoln a letter, in which he set forth that he was trustworthily advised that the Southern States would send representatives to the next Congress, provided that a full and general amnesty should permit them to do so,” wrote presidential aide William O. Stoddard. “The trap was neither so well set nor so well baited as it seemed to be, and Mr. Lincoln was not drawn into any blunder.”36 In the letter on December 8, Wood wrote:

On the 25th November last I was advised by an authority which I deemed likely to be well informed, as well as reliable and truthful that the Southern States would send representatives to the next Congress, provided that a full and general amnesty should permit them to do so No guarantees or terms were asked for other than the amnesty referred to-
Deeming this information of great value if well founded I communicated it in substance to the Hon George Opdyke the mayor of this city whom I know to hold confidential relations to members of your administration, and proposing through him that if the government would permit the correspondence, under its own inspection I would undertake to procure something definite & positive from persons connected with the so called Confederate authorities. Mr Opdyke in reply stated that several senators from New England States were then in this city on their way to Washington to whom he would at once communicate the proposition and advise me of the answer[.] Knowing that these gentlemen were your friends, and supposing that they would immediately confer with you on their arrival at the capital, and supposing that I should be speedily informed of the result I have delayed untill now from making a communication direct to you-
I now learn however from Mr Opdyke this day that he failed to see these Senators when in New York and that he had not made the propositions and that therefore you are not in possession of it as coming from myself Therefore the object of this letter.
As an humble, but loyal citizen, deeply impressed with the great necessity of restoring the Union of these States I ask your immediate attention to this subject[.] The magnitude of the interests at stake warrant some executive action predicated upon this information, if it be only to ascertain whether it be grounded upon even probable foundation
If it shall prove groundless no harm shall have been done, provided the enquiring be made as it can be without compromising the government, or injury to the glorious cause in which it is now engaged
If however it shall prove well founded, there is no estimate too high to place upon its national value-
Now therefore Mr President I suggest that gentlemen whose former social & political relations with the leaders of the southern revolt may be allowed to hold unofficial correspondence with them on this subject, the correspondence to be submitted to you It may be thus ascertained what if any credence may be given to these statements, and also whether a peaceful solution of the present struggle may not be attainable-
I am sure nothing I can say can add to your own well known desires to produce this result-
Your exalted position the embarrassments, and responsibilities which surround you upon all sides the bleeding condition of the country, becoming exhausted not only in the impoverishment of its best life blood of industrial productions, but in the determination, and consequent destruction of our political institutions; all call upon you as our chief ruler to take one step upon the road of peaceful effort by which to ascertain whether the time has not arrived when other methods than brute fighting may not accomplish what military force has failed to do[.] In the origen of this struggle you foresaw that such a time would come[.] Your Inaugural address delivered near two years ago pointed out with prophetic vision the certain results of the impending conflict of arms. Your language then was “suppose you go to war, you cannot fight always, and when after much loss on both sides and no gain on either you cease fighting the identical questions as to terms of intercourse are again upon you” You said that after a bloody and terrible struggle “the still small voice of reason” would intervene and settle the controversy-
You know that since the establishment of christian civilization negociation [sic] and compromise have sooner or later determined every military contest It cannot be otherwise now Has not the time arrived when to quote your own language we should “cease fighting” at least long enough to ascertain whether the “identical questions” about which we began the fight may not be amicably & honourably adjusted, and “the terms of intercourse” be once more peaceably established? It is to this end that I now address you With confidence in your patriotism and with no desire to interfere with your legitimate Constitutional prerogatives…37

Historian Margaret Leech wrote of Wood: “Although he was openly allied with the secessionists, he attempted to maintain a clandestine relation with the administration, and lost no opportunity to ingratiate himself with the White House.”38 Mr. Lincoln was justifiably chary of both Wood and the proposals he presented. The same month, he had categorized the representations of another supposed emissary from Confederate President Jefferson Davis as “a very shallow attempt at humbuggery.”39 The President carefully replied to Wood on December 12.

Your letter of the 8th. with the accompanying note of same date, was received yesterday. The most important paragraph in the letter, as I consider, is in these words: “On the 25th. November last I was advised by an authority which I deemed likely to be well informed, as well as reliable and truthful, that the Southern States would send representatives to the next Congress, provided that a full and general amnesty should permit them to do so. No guarranties or terms were asked for other than the amnesty referred to.”
I strongly suspect your information will prove to be groundless; nevertheless I thank you for communicating it to me.
Understanding the phrase in the paragraph above quoted “the Southern States would send representatives to the next Congress” to be substantially the same as that “the people of the Southern States would cease resistance, and would re inaugerate [sic], submit to, and maintain the national authority, within these limits of such states under the Constitution of the United States,” I say, that in such case, the war would cease on the part of the United States; would cease; and that, if within a reasonable time “a full and general amnesty” were necessary to such end, it would not be withheld.
I do not think it would be proper now for me to communicate this, formally or informally, to the people of the Southern States. My belief is that they already know it; and when they choose, if ever, they can communicate with me unequivocally Nor do I think it proper now to suspend military operations to try any experiment of negotiations.
Any information you may, in your own way, obtain upon this subject, I shall be glad to receive, if you please. Any I should, nevertheless, receive with great pleasure the exact information you now have, and also such other as you may in any way obtain. Such information might be more valuable before the first of January than afterwards.
While there is nothing in this letter which I shall dread to see in history, it is perhaps, better for the present, that it’s existence should not become public.
I therefore have to request that you will regard it as confidential.40

“This morning early Edward came into the President’s office and announced that Mr. [Fernando] Wood was here to see him. ‘I am sorry he is here,’ said the President. ‘I would rather he should not come about here so much. Tell Mr. Wood that I have nothing as yet to tell him, on the subject we conversed about when he was last here.’ Edward went out to deliver his message.
“‘I can tell you what Wood (F.) Wants,’ said the President to me. ‘He came here one day last week to urge me to publish some sort of amnesty for the northern sympathizers and abettors of the rebellion, which would include Vallandigham, and permit him to return; and promised that if I would do so, they would have two Democratic candidates in the field at the next Presidential election.”53