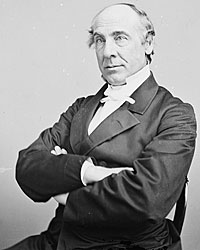 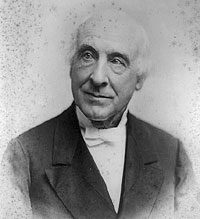 This is all by way of prologue to Dr. Van Buren’s narrative. The Secretary of War telegraphed for him to come to Washington. (He did not send for Hammond.) Bellows went with him. Van Buren reported at the War Department, and the Secretary asked frankly what he should do with the Medical Bureau. “I have called you into a bad case.’ ‘What are the symptoms, Mr. Secretary?” “General imbecility.” They had more than one free discussion, and Van Buren submitted a list of names for the new offices with Dr. [William] Hammond at their head, and [Edward P.]Vollum and [Lewis] Edwards of the regular corps, and R. Lyman and Dr. [Meredith] Clymer of the volunteers, and so on, which the Secretary approved. Then it appeared that Lincoln had been subjected to political pressure and was, moreover, influenced by personal regard for our excellent old colleague, Dr. Wood, who hates Hammond. The medical staff judges of its members by their military record rather than by scientific or professional rank. Bellows tackled Lincoln while he was being shaven [the] next (Thursday) morning and seems to have talked to him most energetically and successfully. He was with the President again last night and was informed that Hammond was appointed. ‘Shouldn’t wonder if he was Surgeon-General already,’ said the President, and they shook hands upon it. I believed this, coming from Lincoln, but I wouldn’t believe it if it came from any other Washington official. “I hain’t been caught lying yet, and I don’t mean to be,” said Abe Lincoln, during their discussion, and such is probably the fact.”
Another Lincoln [story]. Dr. Bellows, apropos of something he said, advised him to take his meals at regular hours. His health was so important to the country. Abe Lincoln loquitur, ‘Well, I cannot take my vittles regular. I kind o’ just browze round.’ He says, ‘Stanton’s one of my team, and they must pull together. I can’t have any one on ’em a-kicking out.'”13

The commission required the cooperation of the government to do its work, but frequently that cooperation was given grudgingly if at all. The Commission’s relations with Secretary of War Edwin M. Stanton were frequently contentious. After Dr. Bellows visited him in April 1863, Strong wrote: “Stanton said he had not intended to attack the Sanitary Commission and had not foreseen the injury his order would do the Commission, but that he did not want to revoke or retract anything at its request or to promote its objects. He was no friend of the Commission — disliked it, and in fact, detested it. ‘But why, Mr. Stanton, when it is notoriously doing so much good service, and when the Medical Department and the whole army confide in it and depend on it as you and I know they do?’ ‘Well,’ said the Secretary, ‘the fact is the Commission wanted [Dr. William A.] Hammond to be Surgeon-General and I did not. I did my best with the President and with the Military committee of the Senate, but the Commission beat me and got Hammond appointed. I’m not used to being beaten, and don’t like it, and therefore I am hostile to the Commission.”14
In the spring, Bellows took a trip aboard a hospital ship to the Jamestown Peninsula before returning to Washington to straighten out administrative matters. “Bellows had waited in Washington for the return of President Lincoln and Secretary of War Stanton because the government had been procrastinating in the appointment of the persons authorized by the Medical Bill,” wrote biographer Walter D. Kring. “Bellows cooled his heels and waited. Eventually it became necessary from the standpoint of the Sanitary commission which had worked so hard getting the bill framed and through Congress that he do something. He called on Stanton on the morning of 13 May. He had waited fifteen minutes and was starting down the stairs when Stanton came up.” Stanton was tired and out of sorts. “Amid obvious hostility Bellows pressed Stanton, expressing hope that the appointments under the new bill would be made as soon as possible. Stanton tested Bellows by asking what his concern was in all of this Bellows replied, ‘We know who the proper men are, and have presented them in a letter Dr. Van Buren has left with you. There may be other men as good — be we do not feel that there are. The service is suffering immensely for prompt action in this matter, and we cannot feel easy while this action is delayed, or willingly see it take a wrong direction.”15 Strong reported in his diary: “After dinner came in Bellows fresh from a row with the Secretary of War about appointments under the Medical Reform Bill, in which Stanton was petulant and insolent and then emollient and apologetic. Bellows thinks he has some cerebral disease.”16
The head of the Army’s medical department, known as the Surgeon General, was particularly important to the Sanitary Commission’s work. Artist Francis Carpenter spent several months working at the White House and later wrote:

“The Rev. Dr. Bellows, of New York, as President of the Sanitary Commission, backed by powerful influences, had pressed with great strenuousness upon the President the appointment of Dr. Hammond, as Surgeon-General. For some unexplained reason, there was an unaccountable delay in making the appointment. One stormy evening — the rain falling in torrents — Dr. Bellows, thinking few visitors likely to trouble the President in such a storm, determined to make a final appeal, and stepping into a carriage, he was driven to the White House. Upon entering the Executive Chamber, he found Mr. Lincoln alone, seated at the long table, busily engaged in signing a heap of congressional documents, which lay before him. He barely nodded to Dr. Bellows as he entered, having learned what to expect, and kept straight on with his work. Standing opposite to him, Dr. B, employed his most powerful arguments, for ten or fifteen minutes, to accomplish the end sought, the President keeping steadily on signing the documents before him. Pausing, at length, to take breath, the clergyman was greeted in the most unconcerned manner, the pen still at work, with, — ‘Shouldn’t wonder if Hammond was at this moment ‘Surgeon-General,’ and had been for some time.’
“You don’t mean to say, Mr. President,’ asked Dr. B in surprise, that the appointment has been made?”
“I may say to you,” returned Mr. Lincoln, for the first time looking up, ‘that it has; only you needn’t tell of it just yet.”17

But the appointment merely exacerbated Stanton’s enmity. Strong wrote in his diary in April 1863: “Bellows just returned from Washington and General Hooker’s headquarters, and told me part of his experiences this afternoon. The War Department has issued an order (No. 87, I think) about the transportation of medical and sanitary stores that seriously curtails the privileges government gives us. I think it was issued inadvertently and in no unfriendly spirit, but Dr. Bellows declares he will resign and make open war on Stanton unless it is resolved or corrected by an explanatory order. He discussed the matter with the solicitor of the War Department (Whiting), an old college friend of his; and in confidential relations with Stanton, Whiting brought the matter before his chief.”18
According to Strong, Secretary of State William H. “Seward told Dr. Bellows that the President and the Cabinet were strong in approval of the Commission; that they had consented to recognize an outside agency and give it a semi-official position very reluctantly, and only because they could not properly say no, and that they had taken it for granted the Commission would collapse and die a natural death within a year after its appointment at latest. But ‘the Commission has made itself a necessity, and it has done its very difficult and delicate work with so much discretion, tact and ability, that’ — and so forth.”19
Just as President Lincoln’s support for the commission increased over time, so did Bellows’ support for President Lincoln increase with time. According to biographer Walter D. Kring, Bellows observed “that it was not only the men who were active in politics this year but the women, who, although they had not vote, made it a point to attend the campaign meetings. For six months in mid 1864, Bellows was absent from New York. He traveled to California in the spring of 1864, remaining for six months and preaching in San Francisco — while raising funds for the Sanitary Commission. Bellows returned to New York City in time to address 3,000 people at the Cooper Institute and had talked for an hour and a quarter ‘at one of the most successful campaign meetings.'”20
Bellows colleague William E. Dodge, Jr. recalled: “There are times when to invent a happy phrase is equal to the winning of a martial victory. As Mr. Seward’s phrase’ the irrepressible conflict’ formulated the situation which preceded and developed the war, so Dr. Bellows’ phrase ‘Unconditional Loyalty’ formulated the necessity of the time when war had actually begun. This phrase brought into existence the New York Union League, the child of the Sanitary Commission, the details of whose organization were worked out by Dr. Bellows and two other officers of the Sanitary Commission on a night-journey from Washington to New York. The government did well to circulate 10,000 copies of Dr. Bellows’ sermon on ‘Unconditional Loyalty’ among the officers of the army and navy.”21
Although he attended President Lincoln’s funeral on April 1865, Dr. Bellows was not impressed by it. He wrote that “a little before twelve we marched to the White House through the grounds that separate it from the Treasury, were shown into the East Room and took our appointed places on the raised steps that occupied three of the sides — the catafalque with its black canopy and open coffin occupying the center. I had a last glimpse of the honest face of our great and good President as we passed by. It was darker than in life, otherwise little changed…”22 Bellows wrote that “the actual service was common-place, & did not voice the occasion, but it could not belittle or stifle it. It was in itself too great & too speaking for that. The grief was genuine profound & all pervading.”23 Of the President’s death itself, Bellows asked his congregation: “May we not have needed this loss to sober our hearts in the midst of our national triumph, lest in the excess of our joy and pride we should overstep the bounds of that prudence and the limits of that earnest seriousness which our affairs demand?”24
Footnotes
Visit