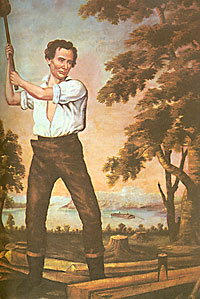 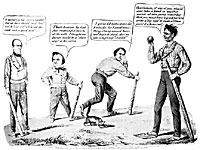 Wideawakes Demonstrating in Support of Lincoln 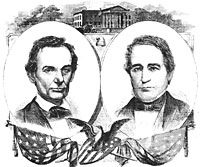 Letting the Cat Out of the Bag

The Great Exhibition of 1860 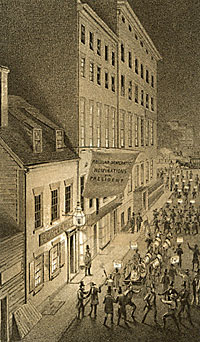 All that manufactured noise, simulated enthusiasm, and fanfare cost money. Speakers had to be paid, too, and newspaper subsidized. It was not surprising that the crinkling of campaign dollars was audible behind the scenes. Judge David Davis appealed to Thurlow Weed to raise more, and ever more, funds, commenting in underscored words: ‘Men work better with money in hand.”
That task of collecting the currency sinews of party warfare was undertaken mainly by Governor Edwin D. Morgan of New York, Republican National Chairman and a money-laden merchant, and [New Hampshire’s George G.] Fogg. The affluent Morgan borrowed $20,000 for the campaign on his own collateral.
Seward’s banker-friend, Richard M. Blatchford of New York, generously opened his checkbook, reminding the party powers after the election, “Mr. Weed tells me the $3,000 which I advanced in one sum last October was sent by him to Mr. Lincoln’s relative Mr. Smith at Mr. Lincoln’s suggestion for the purpose of carrying the Legislature of Illinois which was deemed in danger.”17

Republican presidential standard-bearer Lincoln himself was at the House of Representatives, along with State Auditor Jesse K. Dubois, Senator [Lyman] Trumbull, [Edward I.] Baker of the Illinois State Journal and other intimates.
Then word came from New York! Lincoln’s electors had won that indispensable, vote-rich State! Trumbull’s friend, Henry McPike, described the scene when Lincoln and party received the despatch about the glad tidings from the Empire State:
“Dubois jumped to his feet. ‘Hey,’ he shouted, and they began singing as loud as they could a campaign song, ‘Ain’t You Glad You Jined the Republicans?’
“Lincoln got up and Trumbull and the rest of us. We were all excited. There were hurried congratulations. Suddenly old Jesse grabbed the despatch out of Ed Baker’s hand and started for the door. We followed…Lincoln last. The staircase was narrow and steep. We went down it still on the run. Dubois rushed across the street toward the meeting, so out of breath he couldn’t speak plain. All he could say was, ‘Spetch. Spetch.’ Lincoln, coolest of the lot, went home to tell his wife the news.”30