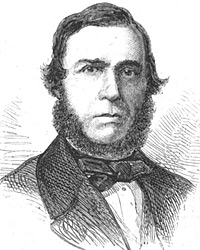 “I am daily more dissatisfied with the Treasury management. Everything is growing worse. Chase, though a man of mark, has not the sagacity, knowledge, taste, or ability of a financier. Has expedients, and will break down the government. There is no one to check him. The President has surrendered the finances to his management entirely. Other members of the Cabinet are not consulted. Any dissent from, or doubts even, of his measures is considered as a declaration of hostility and an embarrassment of his administration. I believe I am the only one who has expressed opinions that questioned his policy, and that expression was mild and kindly uttered. [Montgomery] Blair said about as much and both [he and I] were lectured by Chase. But he knew not then, nor does he know now, the elementary principles of finance and currency. Congress surrenders to his capricious and superficial qualities as pliantly as the President and the Cabinet. If they do not legalize his projects, the Treasury is to be closed, and under a threat, or something approaching a threat, his schemes are sanctioned, and laws are made to carry them into effect; but woe awaits the country in consequence.”24

Four days later, Gideon Welles wrote in his diary: “Congress is getting restive and discontented with the financial management. The papers speak of the appointment of Field, Assistant Secretary, to be Assistant Treasurer at New York, in the place of Cisco. I doubt if any one but Chase would think of him for the place, and Chase, as usual, does not know the reason. But Field has talents and Chase takes him from association. Morgan prefers Hillhouse, and Seward wants Blatchford.”25 .
California journalist Noah Brooks, a close friend of President Lincoln, reported on July 7, 1864: “The faults of Chase above mentioned are minor in character, and the overweening weakness in his character was that desire to control everything which finally brought on his retirement from the Cabinet. The only issue of any moment between Chase and the President was whether the President or the Secretary should appoint the successor of Assistant Treasurer Cisco; the former preferred Hillhouse, a man of unblemished integrity and great financial ability, urged for the place by Senator Morgan of New York. Chase, who has heretofore controlled every appointment, from that of the humblest tide-waiter to a New York Collector, made a sine qua non of his staying in the Cabinet of the appointment of M.B. Field, a gentleman of ability, perhaps, but against whom some popular prejudices have become fixed for the reason that he parts his hair in the middle, wears a white neck-tie and lemon-colored kids, and has not specially distinguished himself in the Treasury Department as yet further than to superintend the fitting up of Chase’s private offices with Axminster carpets, gilded ceilings, velvet furniture, and other luxurious surroundings which go to hedge about a Cabinet Minister with a dignity quite appalling to the unaccustomed outsider. If Chase had been less strong in his pride of self-opinion he would have been more practicable as a Cabinet Minister and would always have harmonized with the President…”26
Cisco stayed on until later in the Lincoln Administration when he was replaced by John A. Stewart. Cisco remained loyal to Chase and served on the committee that tried to help get him the 1868 Democratic presidential nomination. Cisco apparently, however, was not loyal to President Lincoln and supported Democrat George B. McClellan’s presidential campaign in 1864. Cisco continued to work in banking and helped finance a spur of the Texas Central railroad to a town that was appropriately named “Cisco.”
Footnotes
Visit