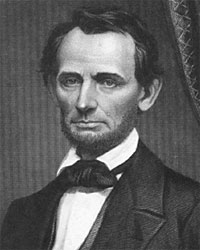 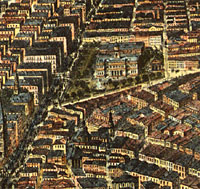 President-elect Lincoln’s trip across the country in February 1861 has often been ridiculed for the banality and naivete of Mr. Lincoln’s comments along the way. He tried mightily to say nothing that might be used as an excuse by residents of other Southern states to aggravate the secession crisis. Mr. Lincoln preferred to exchange insubstantial compliments with the crowd than endure complaints about the substance of his remarks.
“As the journey proceeded, there was no loss of popular support, and Lincoln seemed to grow and mature as a man destined for leadership,” wrote Albert Shaw in Abraham Lincoln: His Path to the Presidency. Shaw stressed that the trip was an education as well as political venture: “A year of quiet thought had prepared him for these days of cautious expression and of valuable contacts with men whose support was to be necessary in the months to come. He had been in conference, the very day before leaving Illinois, with Governor Bross of that State. The next day he was not merely meeting throngs in Indiana and making brief speeches, but was in private conferences with Governor Morton and others. Such experiences at Cincinnati, Columbus and Cleveland gave him a thorough understanding of the sentiment and the politics of Ohio.”1
New York politics intruded into Mr. Lincoln’s travels even before he crossed the New York border. New York Herald reporter Henry Villard wrote: “The Presidential party left Cleveland [Ohio] at nine A.M. today….At Girard several baskets of splendid fruit were presented to the Presidential family. No little sensation was produced at this point by the unexpected appearance on the train of Horace Greeley, equipped with a valise and his well known red and blue blanket. He was at once conducted into the car of the President-elect, who came forward to greet him. He got off again at Erie after traveling about twenty miles with the company.”2 According a report printed in the New York World:

At Girard, a station near Erie, a profound sensation was created by the sudden appearance of Mr. Horace Greeley. He wore that mysteriously durable garment, the white coat, and carried in his hand a yellow bag, labelled with his name and address, in characters which might be read across Lake Erie. He had, it was said, mistaken the special for the general train, and was a good deal embarrassed on finding himself so suddenly cheek by jowl with the chief of the great and triumphant party which he had so large a hand in establishing, and of which he is one of most powerful and least judicious supporters. He at first made an incursion into the reporters’ car, where he was captured, and marched off in triumph, by Mr. Secretary [John] Nicolay, to the President’s car. He was introduced for the first time to Mrs. Lincoln. At the next stopping place Greeley suddenly disappeared. His arrival and departure were altogether so unexpected, so mysterious, so comical, that they supplied an amusing topic of conversation during the rest of the journey.3

Greeley interviewed the President briefly before he disappeared. “The power of Mr. Lincoln is not in his presence or in his speech but in the honesty and gloriously refreshing sincerity of the MAN,” reported Greeley in the New York Tribune. “There is no guile in him, but he has not the weakness which is often the characteristic of what Yankees call cleverness.”4
According to Greeley biographer James M. Trietsch, “One important reason for Greeley’s en-route visit with Lincoln was the fact that the Greeley-Bryant-Barney-Chase New York faction was pressing George Opdyke, defeated Republican candidate for mayor of New York, for the important post of Collector for the Port of that city. On the other hand, the Weed-Seward group backed the important merchant, Simeon Draper, hoping that, by securing the position for him, they might ease some of the mercantile demands that the city secede with the South. Knowing, therefore, that Draper might be unacceptable to Lincoln and some of his advisers, Weed indirectly informed the President-elect that he would accept Richard M. Blatchford, a powerful New York banker, but would not acquiesce in the nomination of ‘that upstart’ Opdyke. Lincoln refused all three suggested nominees. And, much of to the chagrin of Weed and Seward, the incoming chief executive bestowed the New York collectorship upon Hiram Barney, one of the principal anti-Weed leaders and bosom friend of Salmon P. Chase. In fact, the hand of the soon-to-be-Secretary of the Treasury was clearly seen by Weed in this selection, while Greeley considered the appointment a signal victory for his forces.”5
Footnotes
Visit