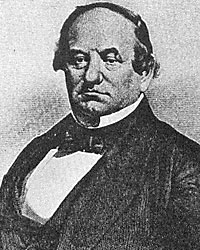 Dean Richmond, like many Republican and Democratic politics leaders, combined business and politicans. Richmond “was one of those original men of great brain-power, force, and character, knowledge of men, and executive ability, of which that period had a number,” wrote New York Republican Chauncey M. Depew, who followed Richmond into the railroad business. “From the humblest beginning he had worked his way in politics to the leadership of his party, to the president of the greatest corporation in the State, the New York Central Railroad Company, and in his many and successful adventures had accumulated a fortune. His foresight was almost a gift of prophecy, and his judgment was rarely wrong. He believed that the disasters in the field and the bad times at home could be charged up to the Lincoln administration and lead to a Democratic victory. He also believed that there was only one man in the party whose leadership would surely win, and that man was Horatio Seymour.”1
Richmond knew when to leave politics at the railroad’s station. In the l860 legislative session, for example, he teamed up with Repubican Thurlow Weed to defeat an effort to place tolls on the state’s railroads. As President-elect Lincoln crossed New York on his way to Washington in February 1861, he rode along Richmond’s railroad pulled by a locomotive named for the Democratic leader. New York Central Vice President Richmond himself boarded the train at Syracuse with lunch for the Lincoln family. “The secret of his power, next to his intuitive knowledge, consists in his prominent disinterestedness,” wrote Weed in 1860. In his years of political leadership, wrote Weed, Richmond “has neither asked nor accepted anything in return. Such patriotism, coupled with the almost unerring wisdom of his counsels, given him great, controlling, and permanent power.”2
Historian George Milton Fort wrote: “Richmond, one of ‘Commodore’ Cornelius Vanderbilt’s ablest lieutenants, had a large part in putting together the various short railroad lines of western New York to make the New York Central system — serving as president of that organization. This experience led him to apply a similar technique to Democratic politics. Richmond [in 1860] took the lead for Douglas; Seymour followed him, and respected his organizing skill and power drive. To [Samuel] Tilden he turned for the development of ideas and the formation of policies growing out of them.”3 They devised strategy for the Democratic National Convention in April.
According to Seymour biographer Stewart Mitchell, “It was said that Richmond’s plan of action at Charleston was to vote the delegation for Senator Douglas until the latter withdrew and then nominate [Horatio] Seymour with the aid of the South and the consent of the North West. By the spring of 1860 the New York Herald thought that the nomination of a New Yorker was extremely unlikely because the Democrats felt that they could never carry the state in November.”4 Mitchell wrote that “This business man from Buffalo was not a bad judge of men. When Ben Butler of Massachusetts submitted his scheme for compromise at Charleston by asking Richmond if it were not ‘an honest and fair proposition,’ the chairman of the New York delegation replied that he had never in all his life seen but three men with casts in their eyes who could be trusted — and Butler was one.”5 Mitchell wrote:

It is not altogether unfair to lay the blame for the breaking up of the Charleston convention on Dean Richmond and the New York delegation. In all close votes an apparent contradiction of practice became evident, for the states could impose the unit rule or not as they pleased. When important matters like the two-thirds rule and the platform were settled by a majority vote, it was obvious that partial use of the unit rule might easily enable a smaller part of the convention to dominate the larger. The state convention had directed that the delegation which was seated should vote as a unit; but for that fact the minority in that delegation of ‘Softs’ could have saved the platform which the South demanded. Only Clancy, Savage and Belmont of the city followed the lead of Douglas men from upstate. Thus twenty votes controlled the other fifteen. Had New York divided her vote in proportion to the opinions of her representatives and let the South have its platform, the convention might never have dissolved.
The vote of New York was decisive a second time. The South contended that the nominee must receive two-thirds of the whole number of delegates — not merely of those voting. In this contention it was supported by New York, which hoped to avoid the withdrawal of the slave states. Richmond’s strategy in these two important contests seems to show that he hoped to nominate Seymour in the end, whatever the latter might think.6