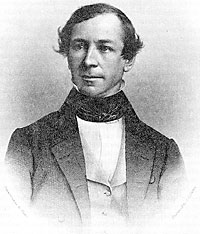 Fernando Wood Early in His Career 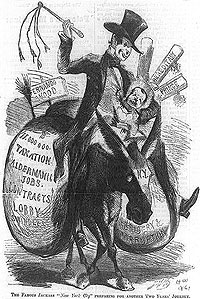 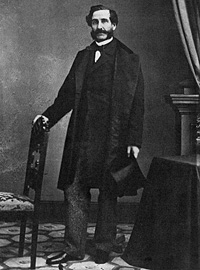 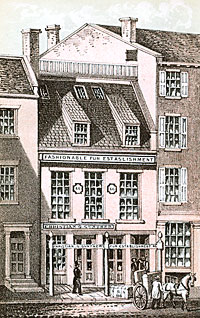 Establishment of Christian G. Gunther, Esq. Father of the Present Mayor in 1820

New York City politics was not for the faint of heart. “Our city legislators, with but few exceptions, are an unprincipled, illiterate, scheming set of cormorants, foisted upon the community through the machinery of primary elections, bribed election inspectors, ballot box stuffing, and numerous other illegal means,” editorialized the New York Herald in January 1860. “The consequence is that we have a class of municipal legislators forced upon us who have been educated in barroooms, brothers and political societies; and whose only aim in attaining power is to consummate schemes for their own aggrandizement and pecuniary gain.”1
The powerful Tammany Hall organization had broken apart in the 1850s over conflicts which originated in the corrupt government of Mayor Fernando Wood. Ironically, some of the problems developed in his first term in office which was relatively progressive and honest. Wood ordered enforcement of laws requiring that saloons be closed on Sunday and a crackdown on prostitution. According New York City historian Oliver E. Allen, Tammany Hall regulars never forgave “him for striking out against the saloons, and they were also irked because he had gone back on a number of promises made to party regulars for city offices — Tammany did not break its word. He was allowed to run again but received only lackluster support and went down to defeat [in 1857]. Indignant, he led his supporters out of Tammany and formed a rival known a Mozart Hall (for the building where it met). In 1859, with Tammany unable to come up with a strong candidate, Wood somehow made it back into City Hall under the Mozart aegis.”2
The split worsened during the 1860 Democratic presidential and state conventions when Mozart Hall challenged Tammany delegations for their convention seats — and adopted positions much more sympathetic to Southern Democrats and secessionists. Historians Edwin G. Burrows and Mike Wallace wrote that Democratic divisions “cost their party the mayoralty in 1861, when Tammany’s C. Godfrey Gunther and Mozart’s Wood divided the Democratic vote, allowing Republican George Opdyke — a wealthy dry-goods importer, banker, and broker and a leader in the Union Defense Committee — to capture City Hall with barely more than one-third of the vote.”3 Opdyke was a Radical Republican whose anti-slavery views came under attack in the campaign.
Republicans blundered in October, according to historian Jerome Mushkat, when the Fifth Avenue Committee, the St. Nicholas Committee, the German League, and the Tax-Payers Committee [were] linked with the Republicans on a Unionist, reformist slate.”4 Their unity spurred Democratic unity as well. But the many reform groups were also symptomatic of their disunity. “Insurgents divided between such groups as Taxpayers Party, St. Nicholas Hotel, Fifth Avenue Hotel, German League, Cooper Institute Reform, and People’s Union. What each group generally stood for was self-aggrandizement, reform and lowering of the tax rate. The electioneering was typical of all New York politics — a fragmented nightmare,” wrote Leo Hershkowitz in Tweed’s New York: Another Look 5 Eventually, the Rent-Payers Association joined the others in supporting George Opdyke’s candidacy.
Meanwhile, wrote Tweed biographer Alexander B. Callow, Jr., Fernando “Wood slyly came forward with a compromise proposal couched in persuasive terms of party harmony. Mozart would call off the war with Tammany, if Tammany in turn would give its backing to Wood for Mayor. It was an adroit tactic. Tweed’s acceptance would have actually signalled his surrender, for if Wood regained the mayor’s office, he would be in a formidable position to destroy Tweed politically. While Tweed refused, he did make a sensible compromise regarding candidates for the State legislature and some unimportant city offices. He agreed that both Tammany and Mozart would share in offering candidates for these offices. Compromise on this level was realistic and necessary, because Wood’s Mozart Hall was powerful enough in 1861 to challenge Tammany.”6 Historian Mushkat wrote: “Both Halls cooperated, but only on an informal level, and selected independent slates although they substantially agreed on a number of common nominees. As to three vital offices, however, those of mayor, district attorney, and sheriff — confusion reigned.”7
Biographer Callow wrote: “The crux of the fight, however, lay in who would win the city— and county-wide offices. Here Tweed prepared for an all-out battle. He was ‘determined that Wood should be destroyed, even if it meant the sacrifice of every man on the regular Democratic city and county tickets….'” Callow noted that although Tweed lost his own campaign for sheriff, “it was a resounding victory for William Marcy Tweed, because the ultimate goal was achieved. Fernando Wood was beaten at the polls.”8
Gunther was a wealthy New York fur merchant whom Tammany hoped would attract German-American voters. But even if he did not win, Tammany Hall hoped he would defeat Mozart Hall and Wood, who had revived his Southern sympathies after a short-lived bout of Union patriotism in the spring of 1861. “Significantly, the attitude of the candidates toward the war was the chief issue of the campaign,” wrote Sidney David Brummer. “Wood declared that the contest was one of conservative nationalism against abolitionism; and claiming that he was the representative of the former, he devoted his speeches largely to denunciation of the latter. At a mass meeting of Germans, he was reported to have said:

They [the abolitionists] will prosecute it [the war] so long as there is a drop of Southern blood to be shed, provided they are removed from the scene of danger. They will get Irish and Germans to fill their regiments to ‘defend the country’ under the idea that they themselves will remain at home, and divide the plunder…They have conquered all the strongholds of the North, and they are now battling against the citadel of the Empire City…9