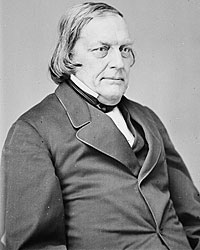 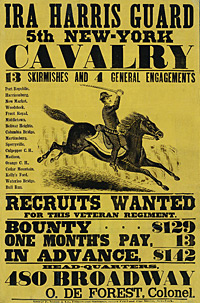 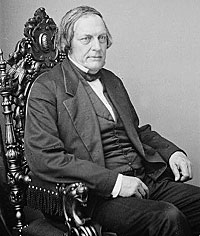 I went most reluctantly. It is painful to see friends and I do not feel like meeting strangers. I cannot bear their inquiring look at my deep crepe. It was General [Daniel] Sickles again, calling with Senator Harris. General Sickles said, “I told Senator Harris that you were at the White House, just from the South and could probably give him some news of his old friend General John C. Breckinridge.” I told Senator Harris that as I had not seen General Breckinridge for some time I could give him no news of the general’s health. He then asked me several pointed questions about the South and as politely as I could I gave him non-committal answers. Senator Harris said to me in a voice of triumph, “Well, we have whipped the rebels at Chattanooga and I hear, madam, that the scoundrels ran like scared rabbits.” “It was the example, senator Harris, that you set then at Bull Run and Manassas,” I answered with a choking throat. I was very nervous and I could see that Sister Mary was annoyed. She tactfully tried to change the subject, whereupon Senator Harris turned to her abruptly and with an unsmiling face asked sternly: “Why isn’t Robert in the Army? He is old enough to serve his country. He should have gone to the front some time ago.”
Sister Mary’s face turned white as death and I saw that she was making a desperate effort at self-control. She bit her lip, but answered quietly, ‘Robert is making his preparations now to enter the Army, Senator Harris; he is not a shirker as you seem to imply, for he had been anxious to go for a long time. If fault there be, it is mine. I have insisted that he should stay in college a little longer as I think an educated man can serve his country with more intelligent purpose than an ignoramus.” General [sic] Harris rose and said harshly and pointedly to Sister, “I have only one son and he is fighting for his country.” Turning to me and making a low bow, “and, Madam, if I had twenty sons they should all be fighting the rebels.” “And if I had twenty sons, General Harris,” I replied, “they should all be opposing yours.” I forgot where I was, I forgot that I was a guest of the President and Mrs. Lincoln at the White House. I was cold and trembling. I stumbled out of the room somehow, for I was blinded by tears and my heart was beating to suffocation. Before I reached the privacy of my room where unobserved I could give way to my grief, Sister Mary overtook me and put her arms around me. I felt somehow comforted to weep on her shoulder — her own tears were falling but she said no word of the occurrence and I understood that she was powerless to protect a guest at the White House from cruel rudeness.18

Despite the incident, Mrs. Lincoln remained on good terms with Senator Harris, writing a friend at the end of the congressional session in March 1865: “Judge Harris called last evening, to say, farewell. He has been so kind a friend that I am quite as attached to him as if he were a relative.”19
Harris’s son William was a colonel in the Army Ordnance Department. Harris’ daughter Clara and her fiancé Major Henry Rathbone, who was Harris’ stepson, were the Lincolns’ guests for the theater on the night of April 14, 1865. The Lincolns were late in picking up the couple at the Harris residence and late arriving at the theater. “The beautiful weather of the morning had given way to fog as the presidential carriage turned out of the White House gates,” wrote biographer Benjamin Thomas. “Gas jets on the street corners glimmered faintly through the mist. The sodden air muffled the horses’ hoofbeats. At half past eight Charles Forbes, the White House coachman, drew rein in front of Ford’s Theater.’20 The Lincolns were alone with their guests when John Wilkes Booth entered their box at the Ford Theater and assassinated the President. Clara Harris subsequently married Rathbone. Tragically, her husband later went insane and killed her.
Footnotes
Visit