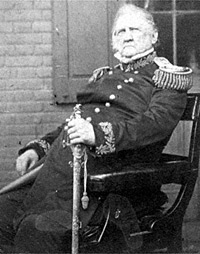 When birds and animals are looked at through a fog they are seen to disadvantage, and so it might be with you if I were to attempt to tell you why I went to see Gen Scott. I can only say that my visit to West Point did not have the importance has been attached it; but it conceived [concerned] matters that you understand quite as well as if I were to tell you all about them. Now, I can only remark that it had nothing whatever to do with making or unmaking any General in the country. [Laughter and applause.] The Secretary of War, you know, holds a pretty tight rein on the Press, so that they shall not tell more than they ought to, and I’m afraid that if I blab too much he might draw a tight rein on me.”8

On June 25, the New York Tribune reported: “President Lincoln left West Point by special train on the Hudson River Railroad about 9 A.M. Arriving at the Thirty-first Street Station at 10 A.M. he was met by Colonel McCallum and conveyed in a carriage to the Jersey City Ferry, where he took a special train at 11 o’clock for Washington over the New Jersey Central Railroad.”9 The visit was a quick one — Mr. Lincoln arrived back in Washington on June 25 — two days after he had left. Meanwhile, Scott himself had prepared a brief memorandum of his ideas:

The President having stated to me, orally, the present numbers & positions of our forces in front of the rebel armies, south & South west of the Potomack, has done me honor to ask my views, in writing, as to the further dispositions now to be made, of the former, towards the suppression of the rebellion, & particularly of the army under McDowell, towards the suppression of the rebellion.
Premising that, altho’ the statements of the President were quite full & most distinct & lucid — yet from my distance from the scenes of operation, & not having recently followed them up, with closeness — many details are still wanted to give professional value to my suggestions— I shall, nevertheless, with great deference, proceed to offer such as most readily occur to me — each of which has been anticipated by the President.
I consider the numbers & positions of [John C.] Fremont & [Nathaniel] Banks, adequate to the protection of Washington against any force the enemy can bring by the way of the Upper Potomack, & the troops, at Manassas junction, with the garrisons of the fort on the Potomack & of Washington, equally adequate to its protection on the South.
The force at Fredericksburg seems entirely out of position, & it cannot be called up, directly & in time, by McClellan, from the want of rail-road transportation, or an adequate supply train, moved by animals. If, however, there be a sufficient number of vessels, at hand, that force might reach the head of York river, by water, in time to aid in the operations against Richmond, or in the very improbable case of disaster, there, to serve as a valuable reinforcement to McClellan.
The defeat of the rebels, at Richmond, or their forced retreat, thence, combined with our previous victories, would be a virtual end of the rebellion, & soon restore entire Virginia to the Union.
The next remaining important points to be occupied, by us, are — Mobile, Charleston, Chattanooga. These must soon come into our hands.
McDowell’s force, at Manassas, might be ordered to Richmond, by the Potomack & York rivers, it & be replaced, at Manassas, by King’s brigade, if there be adequate transports at, or near Alexandria.10