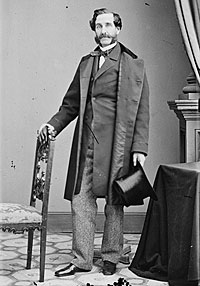 The stage was finally set when, on the day before the trial opened, Rufus S. Andrews, lately dismissed as surveyor of the port through Weed’s influence, published in the Tribune a letter to Weed that fairly quivered with savage vituperation. Weed was told that he was an unscrupulous old liar.” He was dared to deny that he had had a direct pecuniary interest in the gridiron bills of 1860. [Rufus F.] Andrews accused him of betraying Wadsworth in 1862, and of spreading slander about Mrs. Lincoln’s ‘treasonable’ conduct. ‘Why don’t you emulate the last virtue of Judas Iscariot,’ sneered the enraged ex-surveyor, ‘and go out and hang yourself?’
Such was the atmosphere in which the trial opened. It was not, as Raymond remarked, a very edifying spectacle to see men who owed whatever prominence they had attained to Weed and his activities, ‘elbowing one another in frantic competition for the final stab at his character and career.’
The trial opened in New York Circuit Court on December 13, 1864, before Judge Mason. Both principals were there, Weed’s calm, benevolent appearance contrasting sharply with that of the irritable, fussy Opdyke….
For almost a month the opposing counsel badgered a succession of witnesses, wrangled with the Court, and fought with one another. A vast amount of testimony was taken, some of it to the point, most of it characterized by prolixity rather than by relevance to the charges. Then on January 11, after the lawyers for the defense had pointed out how completely Weed’s accusations had been substantiated, and the lawyers for the plaintiff had pointed out how libelous had been every charge that he had made, the jury of twelve good men and true agreed to disagree.
The jurors had differed, apparently, as to whether Weed should pay nominal damages of six cents, or be acquitted.15