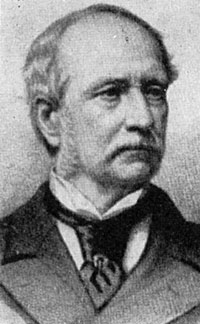 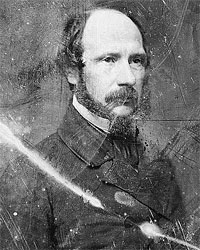 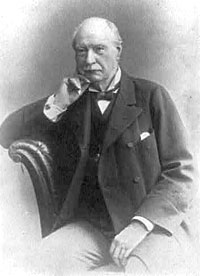 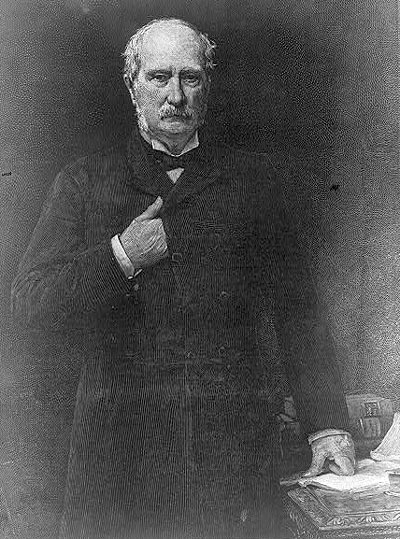 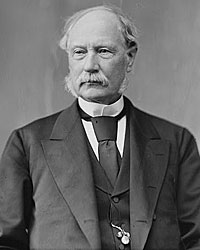 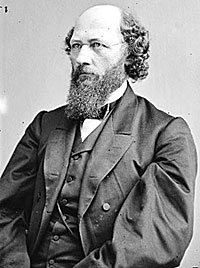 Mr. Lincoln first met David Dudley Field in Chicago at the River and Harbor Convention in July 1847 where Mr. Lincoln delivered a reply to Field’s contention that publicly financed public works should be limited by the Constitution. The New York Tribune reported that the “Hon. Abraham Lincoln, a tall specimen of an Illinoisan…was called out, and spoke briefly and happily in reply to Mr. Field.”1 At that point, Field was a “Barnburner” Democrat and Mr. Lincoln was a Whig. By 1856, however, both men had become Republicans.
Mr. Lincoln next met Field in New York City in February 1860 when Field called to order a meeting at Cooper Institute and moved that New York Evening Post editor William Cullen Bryant be made chairman of the meeting. At that meeting, Mr. Lincoln analyzed the history of slavery in the Constitution and other founding documents of the Republic. By this time, Field had moved from being an anti-slavery Democrat to a staunch Republican — albeit as a supporter of Edward Bates for the Republican presidential nomination in May 1860. (By the 1870s, Field had returned to the Democratic Party; he served briefly in Congress in 1876).
As a former free-Soil Democrat, Field came into conflict with the leader of the former Whigs in the Republican Party, Thurlow Weed. In 1856, Field and James S. Wadsworth had aspired to the Senate nomination of the new Republican Party in New York State. Weed, however, favored Preston King. “The opposition united behind Field, and then demanded that the question be settled by those members of the legislature who had come into the Republican party from the ranks of the Democracy, With some show of reluctance Weed agreed to this procedure, whereupon the caucus that was held chose [Preston] King, and Field went back to New York to place himself beside the other enemies of the ‘Old Man,” wrote Weed biographer Glyndon Van Deusen.2 When Senator William H. Seward’s successor was chosen in February 1861, Field went to Albany — this time to lobby for Tribune editor Horace Greeley against the Weed candidate William Evarts.
Field also actively campaigned against Seward’s appointment and for Chase’s inclusion in President Lincoln’s Cabinet in 1861. He wrote that at White House meeting with Gideon Welles, “Mr. Chase, Mr. Seward, and Preston King, I denounced Mr. Seward’s political theories, and reminded the President that Mrs. Seward’s friends were not only against his nomination but against his election, until they found that he would be elected without them.”3 In late December 1862, Field was once again at White House to complain about Seward. President Lincoln told aide John Hay that “into my room one day walked D.D. Field & George Opdyke and began a new attack upon me to force me to remove Seward. For once in my life I rather gave my temper the rein and I talked to those men pretty damned plainly.”4
Field did not forget such slights. Along with former New York City Mayor Opdyke, Field took a prominent role in organizing the Republican conspiracy to replace President Lincoln at the head of the Republican ticket in August 1864. Historian Allan Nevins wrote: “The meeting that the hastily-assembled Opdyke political camarilla called to discuss a possible new convention had duly taken place at the house of David Dudley Field on August 30. This snake-cold attorney, aggressive in temper and sometimes careless of ethics in conducting dubious legal cases, had been chairman of the New York delegation to the Peace Conference in 1861, had since leaned toward a compromise peace, and would yet rejoin the Democrats. He was no friend of Lincoln.”5 Dudley was a logical person to organize the meeting since he maintained amicable relations with persons as diverse as Greeley, Opdyke and William Cullen Bryant.
Nevins’ opinion of Field’s legal skills was not shared by most contemporaries and historians who rated him as a distinguished lawyer and legal expert — although those who hired him were sometimes less distinguished. Among Field’s clients were railroad tycoon Jay Gould and Democratic boss William Marcy Tweed. Field himself was involved in several attempts to codify New York State’s laws, including the so-called “Field Code” of civil procedure. He also developed a model criminal code and in 1873 unveiled his “Outlines of an International Code.’
Field was one of a distinguished set of brothers. One brother, Henry M. Field, was a well known clergyman and writer on religious, historical and travel topics. Another brother, businessman Cyrus W. Field, was founder of the Atlantic Telegraph Company, which laid the first transatlantic cable. A third brother, California lawyer Stephen J. Field, was nominated in by President Lincoln to become Justice of the U.S. Supreme Court. “Field’s strong Unionist position, his contribution to California legal practices, his knowledge of land title cases, and the support of California’s congressional delegation as well as that of Governor Leland Stanford made him the most logical choice to fill the tenth justiceship, wrote David Silver in Lincoln’s Supreme Court. Silver wrote that David Dudley Field, “who gave Lincoln advice and counsel throughout the war, played a prominent role in securing the tenth justiceship for his brother.”6
According to Stephen Field’s biographer, Paul Kens, Dudley’s brother was “one logical choice. Field was the highest judicial officer in the State. He was a Democrat, but at least in one public speech, he had declared himself to be a loyalist.” More important, Mr. Lincoln was loyal to David Dudley Field. Kens wrote: “Family lore has it that, in a personal interview with the president, a prominent New Yorker named John Gray recommended Field’s appointment. ‘Does David want his brother to have it?’ Lincoln was said to have asked. ‘Yes,’ said Mr. Gray. ‘Then he shall have it,’ replied the president, and the nomination was sent to the Senate that afternoon.”7
Footnotes
Visit