Process of Drafting in the 6th District 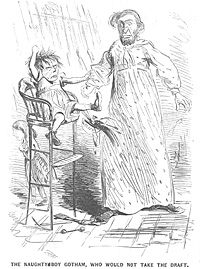 The Naughty Boy Gotham, who would not take the Draft