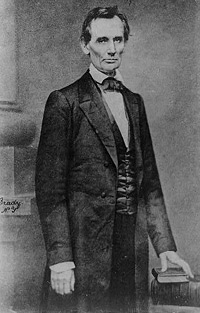 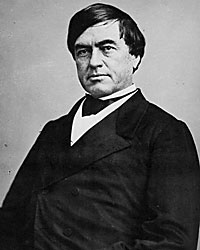 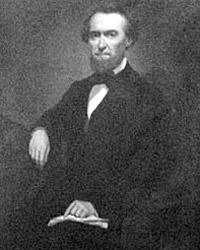 The Cooper Union speech offered Mr. Lincoln an opportunity to define himself before the Eastern mandarins of the Republican Party and to show them that a Westerner had the gravitas to be a presidential contender. “Precisely what Lincoln needed,” wrote Albert Shaw, was the opportunity to show himself before a New York audience of the highest intelligence in his real character as a thorough student of our constitutional history, as a master of diction perfect suited to his theme, and as a man of dignified personality, far removed from the grotesque mountebank about whose uncouthness there had been many rumors afloat.”1
Originally, the lecture invitation came from the lecture committee of the Plymouth Church in Brooklyn where Henry Ward Beecher preached. According to Beecher biographer Lyman Abbot, “the Plymouth Church edifice was not idle throughout the week. It was the best auditorium in Brooklyn for public lectures, and was in frequent use. It served as a lecture-hall as well as meeting-house.”2 Andrew A. Freeman wrote in Abraham Lincoln Goes to New York, Henry “Bowen, a wealthy merchant who had founded Plymouth Church and persuaded Henry Ward Beecher to leave a pulpit in Indianapolis to be its pastor, was not a member of the committee that had arranged for Lincoln’s speech. The two men had not met, although Bowen had once retained Lincoln’s law firm to represent him in an Illinois litigation. Lincoln, however, knew The Independent which Bowen started in 1848.”3
Historian Reinhard H. Luthin cited a different source for the invitation: “In the fall of 1859 James A. Briggs, who was working for Chase and cooperating with the anti-Seward forces in New York, invited Lincoln to speak at the Reverend Dr. Henry Ward Beecher’s Plymouth Church in Brooklyn.”4 Briggs, who served on the lecture committee for Plymouth Church and as a political ally of Ohio Senator Salmon P. Chase, had telegraphed Mr. Lincoln on October 12, 1859: “Will you speak in Mr Beechers church Brooklyn on or about the twenty ninth (29) November on any subject you please pay two hundred (200) dollars”.5 What Mr. Lincoln may not have known at the time was that the invitation for the event came from the faction of New York Republicans opposed to the leadership of Senator William H. Seward. In inviting Mr. Lincoln, they were not only doing a service to him, they were attempting to do a disservice to Seward by promoting one of his potential Republican opponents.
Mr. Lincoln’s law partner, William H. Herndon recalled that one morning in October, Mr. Lincoln rushed into their office “with the letter from New York City, inviting him to deliver a lecture there, and asked my advice and that of other friends as to the subject and character of his address. We all recommended a speech on the political situation. Remembering his poor success as a lecturer himself, he adopted our suggestions. He accepted the invitation of the New York committee, at the same time notifying them that his speech would deal entirely with political questions, and fixing a day late in February as the most convenient time. Meanwhile he spent the intervening time in careful preparation. He searched through the dusty volumes of congressional proceedings in the State library, and dug deeply into political history. He was painstaking and thorough in the study of his subject, but when at last he left for New York we had many misgivings — and he not a few himself — of his suc[c]ess in the great metropolis.”6 In response to Mr. Lincoln’s proposal of a political speech, Briggs agreed, writing back:

Your letter was duly received; I handed it over to the Committee, & they will accept your Compromise. And you may Lecture the time you mention, & will pay you $200. I think they will arrange for a Lecture in N. Y. also, and will pay you $200 for that, with your consent. Thus you may kill two birds with one stone.
I understand the time between the 20th and last of February. Let me know about one week or so before the day fixed upon for the first Lecture.
The political cauldron is boiling here. New Jersey will elect Mr. [Charles S.] Olden [as Governor]. Her people are aroused & hard at work.
[Thomas] Corwin is here from Ohio, & he will stir them up to good works. Mr. W[illiam]. L. Dayton is on the stump in New Jersey, doing a Yeoman’s work.
Would that we could have the pleasure of listening to you, before the Campaign closes. I have no doubt of the success of the Republicans in this State. I think it is a mistake that Senator [William H.] Seward is not on his own battlefield, instead of being in Egypt surveying the route of an old Underground Rail Road, over which Moses took, one day, a whole nation, from bondage into Liberty. But, in his own time, he will be heard from, on the “Irrepressible conflict.”
I hope for complete & glorious success in 1860. We must succeed & rescue the Government from its present plunderers.7

On November 13, Mr. Lincoln wrote Briggs about the Brooklyn invitation: “I will be on hand; and in due time, will notify you of the exact day. I believe, after all, I shall make a political speech of it. You have no objection? I would like to know, in advance, whether I am also to speak, or lecture, in New-York.”8 Mr. Lincoln went to work preparing for the lecture for three months, according to law partner Herndon: “Mr. Lincoln obtained most of the facts of his Cooper Institute speech from Elliot’s ‘Debates on the Federal Constitution.’ There were six volumes, which he gave to me when he went to Washington in 1861.”9 Biographer Benjamin Thomas noted that Mr. Lincoln put “in hour after hour at the State Library, where he examined the Annals of Congress and the Congressional Globe and turned interminable pages of old, dusty newspapers as he sat hunched over a table, running his long fingers through his coarse black hair.”10