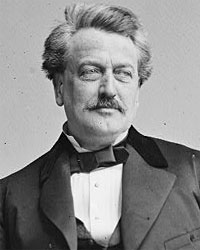 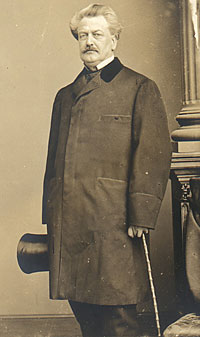 Mr. Weed was here at the Astor House on my arrival last Saturday morning, and I gave him the note you sent him.
He read it over, carefully once or twice and then said he did not quite understand it. He had written a letter to Judge Davis which the Judge had probably show you, but in that he had said nothing about Custom House matters.
He said that all the solicitude he had was in your behalf. You had told him in January last that you thought you would make a change in the Collectorship here, but that thus far it had not been done. He had told you he himself had no personal preference as to the particular man who is to be his [the present Collector’s] successor. He did not think Mr. Barney a bad man but thought him a weak one. His four deputies are constantly intriguing against you. Andrews is doing the same. Changes are constantly being made among the subordinates in the Custom House, and men turned out, for no other reason than that they take active part in primary meetings &c. in behalf of your re-nomination.
His only solicitude he said, was for yourself. He thought that if you were not strong enough to hold the Union men together through the next Presidential election, when it must necessarily undergo a great strain, the country was in the utmost danger of going to ruin.45

According to Weed, “A change in the Custom House was imperatively needed because one whose bureau in it had been engaged in treasonably aiding the rebellion.”46
President Lincoln again unsuccessfully pushed the Treasury Secretary to dismiss Barney on June 6, 1860. According to biographer Albert Bushnell Hart, President Lincoln had already offered Barney a diplomatic post. Earlier on June 6, according to Chase biographer John Niven, President Lincoln met with chase investigator Joshua Bailey, Niven wrote that Bailey “was unable to convince him of his truthfulness. In the afternoon after his interview with Bailey, Lincoln himself paid Chase a visit. The President opened the conversation on the persistent custom-house problem. After he gave his opinion, an unfavorable one about Bailey, he went on to speak of Barney’s replacement. Chase as usual was well prepared and his tone of voice was self-assured. He denied that Bailey had been so indiscreet to say what he was alleged to have said and he backed this statement up with a detailed account of Bailey’s activities.”47 Biographer Bushnell wrote: “This personal conference removed the difficulty for the time being; there is some reason to suppose that Chase again threatened to resign, and that the President again gave way.”48 (Noted biographer Niven: “The Bailey-Barney affair was just one more flagrant instance of Chase’s inability to judge correctly the character of his subordinates and his political coterie.”)49
The President and the Secretary exchanged names of possible replacements for Barney. The President recommended former Senator Preston King — although he undoubtedly knew that Simeon Draper and Abram Wakeman were the top candidates of Barney’s critics. “The New York faction convinced the president that a more forceful leader than Barney was needed to control the state’s patronage during the campaign,” wrote Chase biographer Frederick J. Blue. When the controversy over replacing John Cisco as Assistant Treasury Secretary for New York brought Chase’s resignation later in June 1864, it opened the way for other changes in New York patronage. Biographer Blue wrote: “With Chase gone from the cabinet and [new Treasury Secretary William P.]Fessenden not committed to Barney’s retention, Lincoln was free to make a change. As Barney explained to Chase, the president requested his resignation ‘as a personal and political favor of great value and importance to him.'”50
In late August John G. Nicolay was dispatched to New York to make the necessary job shifts. After a conference, Barney submitted his resignation. Simeon Draper, whom Chase biographer John Niven described as “Weed’s whimsical bagman,” was named to replace Barney.51 Barney remained loyal to to Chase — serving on a presidential organizing committee in 1868. He was at Chase’s side when he died.
Footnotes
Visit