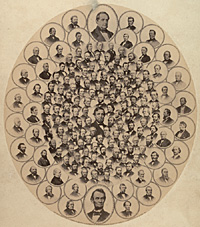 House Speaker Galusha Grow visited President Lincoln in the White House one night. Seeing the initials W and W on one of the pigeonholes on President Lincoln’s desk, Grow said: “Pardon my curiosity, but I cannot help wondering what W. And W. stands for.” Smiling, President Lincoln, said “W and W. Stands for Weed and Wood, Thurlow and Fernandy — a pair of them.”1 Democrat Wood and Republican Weed represented the unique set of powerful New Yorkers with which Mr. Lincoln had to deal.
Fernando Wood “was at all times and in all places a trimmer of the first-order,” wrote Lincoln chronicler Rufus Rockwell Wilson. “During the first years of the war he persistently misread the underlying Union sentiment that swayed the North, and more than once proved a thorn in the side of Mr. Lincoln, but the latter always made a way to ignore or outwit him. On the other hand, while mindful of the selfish motives which often shaped Mr. Weed’s actions, he was from the first keenly aware of the latter’s political acumen and skill in the management of men, and, exercising due caution, he never failed to enlist that acumen and skill when he felt that they would aid him in the great task of preserving the Union. In few words, Mr. Lincoln knew how to sue Mr. Weed, and at the same time artfully feed the latter’s sense of his own importance.”2
Weed and wood were unique personalities — but New York had a host of colorful and mentionable characters with which Mr. Lincoln was forced to deal — from preacher Henry Ward Beecher to editor James Gordon Bennett. Although New York was removed from the battle front, the city was not removed from the vicissitudes of war and there was a clear propensity of the merchant and laboring classes to panic and protest. Given the political and religious splits in the city, such sensitivity was perhaps natural. It was magnified by the presence of the country’s largest and most influential newspapers which competed for influence and sales. “Men in New York men who are sensible in most things, are the most easily terrified and panic-stricken of any community,” wrote Navy Secretary Gideon Welles in his diary in September 1862. “They are just now alarmed lest an ironclad steamer may rush in upon them some fine morning while they are asleep and destroy their city. In their imagination, under the teachings of mischievous persons and papers, they suppose every Rebel cruiser is ironclad, while in fact the Rebels have not one ironclad afloat. It only requires a sensation paragraph in the Times to create alarm.”3
In June 1863, Welles recorded a similar emotional response as Confederates invaded Pennsylvania: “General [John E.] Wool, Governor [Edwin D] Morgan, and Mayor [George] Opdyke make a combined effort to retain the Roanoke at New York, and write me most earnestly on the subject. The idea that New York is in danger is an absurdity, and, with a naval force always at the navy yard and in the harbor, and with forts and military force, is such a remote contingency that the most timid lady need not be, and is not, alarmed. Morgan and Opdyke, Governor and Mayor, have responsibilities that are perhaps excusable, but not General Wool, who feeds on panic and fosters excitement.”4 What Welles seemed to have forgotten that “Governor Morgan” was by then “Senator Morgan” and a not easily excitable man.
Ironically, New York City was in danger — but from its own citizens. Only a two weeks later, a different kind of panic seized New York City. This time it was justified New York was the site of four days of rioting against military conscription — that the Lincoln Administration has imposed on the city.
“Even as national issues and decisions affected New York, New York events affected the nation, if only because it was the most populous and richest state in the Union. Census takers counted 3,880,735 people in New York in 1860, nearly 800,000 more than in 1850 and almost one million ahead of the next most populated state Pennsylvania,” wrote historian Paula Baker.5 Panic seized Washington as well as New York.
The pressure on Mr. Lincoln from New York began before the election and continued afterward.
Preston King wrote John Bigelow on November 12: “I think there is no danger of Lincoln making any declaration to anticipate the day of his inauguration, but I am glad that Mr. Bryant wrote — for we cannot be too secure upon such a point.”6 The curious nature of New York politics was illustrated by a letter from New York Republican boss Thurlow Weed to Secretary of State William H. Seward in November 1863:

I have been two hours with Pa. Gentleman It was a strange revelation, for he represents V[allandigham] of Ohio, W[ood]. of N-Y, and other strange People, including McClellan, all of whom he proposes to bring to the support of the Country!
I was unprepared for this, but of course was not surprised.
I saw [Dean] Richmond at Albany yesterday, and explained [freely?] to him. He went heartily into the Programme for finishing Rebellion, saying that upon that basis the Democracy of New-York would come promptly to the rescue.
The Peace Democracy consider their game played out. But can they be useful? The Pa. Gent. reminded me that V. received the largest vote ever cast by the Democracy of Ohio. I told him that I had no Friends who were against the Government, and no Enimies for who are for it. At the close of the interview I saw that he was in communication with the P-M-G.7

At one of the “levees,” in the winter of 1864, during a lull in the hand-shaking, Mr. Lincoln was addressed by two lady friends, one of whom is the wife of a gentleman subsequently called into the Cabinet. Turning to them with a weary air, he remarked that it was a relief to have now and then those to talk to who had no favors to ask. The lady referred to is a radical, — a New Yorker by birth, but for many years a resident of the West. She replied, playfully, ‘Mr. President, I have one request to make.’ ‘Ah!’ said he, at once looking grace. “Well, what is it?” “That you suppress the infamous ‘Chicago Times,'” was the rejoinder. After a brief pause, Mr. Lincoln asked her if she had ever tried to imagine how she would have felt, in some former administration to which she was opposed, if her favorite newspaper had been seized by the government, and suppressed. The lady replied that it was not a parallel case; that in circumstances like those then existing, when the nation was struggling for its very life, such utterances as were daily put forth in that journal should be suppressed by the strong hand of authority; that the cause of loyalty and good government demanded it. “I fear you do not fully comprehend,” returned the President, “the danger of abridging the liberties of the people. Nothing but the very sternest necessity can ever justify it. A government had better go to the very extreme of toleration, than to do aught that could be construed into an interference with, or to jeopardize in any degree, the common rights of its citizens.33

As the 1860 elections demonstrated, these politicians were a difficult group to organize — split as they were by factions, by schemes, and by ambitions.
Footnotes
Visit