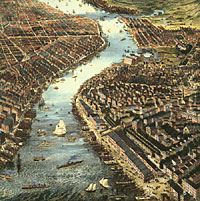 “On that famous visit no one met Lincoln when he stepped off the ferry at Cortlandt Street. Instead, he unobtrusively found his own way to the Astor House. The next day was Sunday, and Lincoln took a two-cent ferry ride to Brooklyn to hear the renowned antislavery preacher Henry Ward Beecher at the Plymouth Church,” wrote contemporary George Haven Putnam.1 According to Andrew A. Freeman: “The Astor House could accommodate 600 guests, the top price per room for a night being two dollars. It was five stories high and was built around a courtyard where a fountain played.” He added that “The hotel, noted for the excellence of its cuisine and bar, was a favorite with politicians and writers.”2
“Will you come to Brooklyn and attend church with me on Sunday,” Henry C. Bowen, the owner of an antislavery newspaper, The Independent, had asked Mr. Lincoln when the Illinois lawyer visited the newspaper offices on the Saturday of his arrival. Mr. Lincoln, who had been seeking details of the arrangements for his speech on Monday, had lain down on Bowen’s sofa while they conversed. Mr. Lincoln told Bowen he “would be very glad to do so. He asked where I attended church. I told him Plymouth Church; and he said he would like to hear Mr. Beecher, and that he would come over in good time. I then invited him to dine with me after the morning service. He said he would do so.”3
The next morning, “Lincoln had walked out of the Astor House in the church-bound steam of traffic on Broadway and made his way to the Fulton Street ferry which, on Sundays, was known as ‘Beecher’s ferry.’ A boat left every five minutes for the trip across the East River to Fulton Street, Brooklyn, The fare was five cents,” wrote Andrew A. Freeman in Abraham Lincoln Goes to New York. The church was such a tourist destination that street car conductor called “Beecher” rather than the street name when they approached Plymouth Church. Freeman wrote: “It was a short distance to the church, a plain, two-story brick building on Orange Street, between Hicks and Henry Streets, in the section called Brooklyn Heights. It was 9:30 o’clock, a half hour before services were to begin. Already a line had formed at the door and he joined it.”4 Bowen wrote:

I escorted him to my pew. His presence in church was unknown to anybody. A few moments before the service commenced, I introduced him to Mr. Horace B. Claflin, who sat in the next pew behind me. He talked with him a moment, and then Mr. Claflin turned around and spoke to his neighbor in the adjoining pew; and I am pretty sure that within ten minutes a large proportion of the audience knew Mr. Lincoln was present. The sermon seemed to interest him very much; after the meeting closed I invited Mr. Beecher — on a slip of paper — to come down and speak to Mr. Lincoln. He did so, and the interview seemed to attract the attention of the audience, who remained, almost in a body, to look at the distinguished stranger from Illinois. All seemed anxious to shake hands with him, and hundreds did so.5

Mr. Lincoln tired of the attention and said “I think, Mr. Bowen, we have had enough of this show, and I will now go with you.” They left the church and went to the Bowen home but when they arrived, Mr. Lincoln declined to enter. “Now, look here, Mr. Bowen, I am not going to make a failure at the Cooper Institute tomorrow night, if I can possibly help it. I am anxious to make a success of it on account of the young men who have so kindly invited me here. It is on my mind all the time, and I cannot be persuaded to accept your hospitality at this time. Please excuse me and let me go to my room at the hotel, lock the door, and there think about my lecture.”6 Mr. Lincoln apparently did just that because there is no other information on his schedule until the next morning.
By Monday morning, the event sponsors discovered him. According to George Putnam, “The Committee of Invitation included, in addition to a group of the old Whigs (of whom my father was one), representative Free Soil Democrats like William C. Bryant and John King. Lincoln’s methods as a political leader and orator were known to one or two men on the committee, but his name was still unfamiliar to an Eastern audience. It was understood that the new leader from the West was going to talk to New York about the fight against slavery. It is probable that at least the larger part of the audience expected something ‘wild and wooly.”7 The change in sponsorship, according to Lincoln biographer Stephen Oates, gave the speech “a new significance in terms of his own Presidential possibilities, as anti-Seward forces treated him like a celebrity and lavishly entertained him at the Astor House.”8 Putnam noted: “Monday morning came and with it a last reminder to Tribune readers that Lincoln was to talk that night. At the top of the editorial page, Horace Greeley published this notice:

Remember Abraham Lincoln’s address at the Cooper Institute tonight and ask your friends who are not Republicans to accompany you to hear it. It is not probable that Mr. Lincoln will be heard again in our city this year, if ever. Let us improve the present opportunity.9

Fellow Illinoisan Mason Brayman visited Mr. Lincoln in the Astor House, where Brayman was also staying. Attorney Brayman had rented Mr. Lincoln’s Springfield house for one year while Congressman Lincoln was in Washington in 1848-1849. It was Brayman, who as attorney for the Illinois Central Railroad in 1858, hired Mr. Lincoln to represent the company and thereby earn a $5000 fee. Recalled Brayman: “We went to his room. Then came a black Republican to take him up Broadway ‘to show him the fine buildings’ but I guess it was to show him to the fine buildings. On his heels came a delegation from Patterson and Orange in New Jersey, begging him to go over and make speeches in those places. Thus, you perceive the fame of Ancient Abraham has extended even into foreign lands. To these unsophisticated heathens he presented me with a caution to be careful what they said, as I was a democrat. Then came a Young Mans Committee of five whereupon I bolted for the door taking another man’s coat in my haste.”10
Another version of the day’s events was later given by committee member Richard C. McCormick, who was a journalist at the New York Evening Post: “On Monday morning I waited upon him with several members of the Young Men’s Republican Union into whose hands the preparations for the meeting at the cooper Institute had chiefly fallen. We found him in a suit of black, much wrinkled from its careless packing in a small valise. He received us cordially, apologizing for the awkward and uncomfortable appearance he made in his new suit, and expressing himself surprised at being in New York. His form and manner were indeed very odd, and we thought him the most unpreposessing public man we have ever met.”11
McCormick later wrote: “I spoke to him of the manuscript of his forthcoming address, and suggested to him that it should be given to the press at his earliest convenience, that it might be published in full on the morning following its delivery. He appeared in much doubt as to whether any of the papers would care to print it, and it was only when I accompanied a reporter to his room and made a request for it, that he began to think his words were to be of interest to the metropolitan public. He seemed wholly ignorant of the custom of supplying slips to the different journals from the office first putting the address in type, and was charmingly innocent of the machinery so generally used, even by some of our most popular orators, to give success and éclat to their public efforts. The address was written upon blue foolscap, all in his own hand, and with few interlineations. I was bold enough to read portions of it, and had no doubt that its delivery would create a marked sensation through the country.”1213
According to Putnam, “Rain and snow made moving around the city difficult on Monday, but Lincoln visited Knox Great Hat and Cap Establishment at Broad and Fulton Street, where he received a free silk top hat. Then he went to Matthew Brady’s framed photo studio at 543 Broadway and posed for his picture.”14 Contemporary biographer Josiah G. Holland wrote: “In a photographic establishment on Broadway, he met and was introduced to George Bancroft, the historian..”15 Bancroft was not only the author of the History of the United States; he had held two Cabinet posts and been Minister to London. Committee host Richard McCormick recalled: “The contrast in the appearance of the men was most striking — the one courtly and precise in his every word and gesture, with the air of a trans-Atlantic statesman; the other bluff and awkward, his every utterance an apology for his ignorance of metropolitan manners and customs.” Mr. Lincoln told Bancroft that he was on his “way to New Hampshire where he had a son in college, who, if report were true, already knew much more than his father.”16
“By evening the weather grew worse,” wrote Putnam. “It was snowing heavily. Nevertheless, fifteen hundred people came to hear Lincoln speak at the Great Hall of the brownstone building on Fourth Avenue and Eighth Street erected by the eccentric industrialist Peter Cooper for the betterment of the working class. Each person in attendance that evening paid twenty-five cents for the privilege, and the audience was generally sympathetic.17
Footnotes