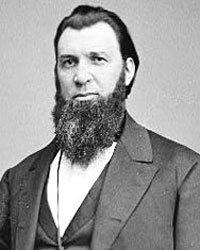 Abram Wakeman was “affable, insinuating and pleasant, though not profound not reliable,” observed Navy Secretary Gideon Welles.1 Welles, a strong critic of New York politics, did not approval of President Lincoln’s shift in New York patronage in September 1864: “The removal of Andrews as Naval Officer, the appointment of Wakeman to his place, causing Wakeman to leave the post-office, into which they have thrust Kelly, an old fiddler for Seward in other years, is a Weed operation.”2 Wakeman’s political background was limited. He had served only a single term in the New York State Assembly in the early 1850s and a single term in Congress (1855-1857). His real claim to political power was his association with Republican leaders Thurlow Weed and Henry J. Raymond.
In March 1864, one of Wakeman’s sponsors, New York Times editor Raymond, wrote President Lincoln: “If the Collectorship of this Port is to be vacated I beg leave to say that in my judgment Hon. A. Wakeman is the very best man for the succession. His ability, personal character, political experience, & general familiarity with the duties and responsibilities of such a position qualify him to fill it with complete success. His appointment, moreover, I think would contribute largely towards healing sundry domestic differences in the ranks of the Union party, and that too without any sacrifice of principle or any injustice to individuals.”3
In 1864, Wakeman would serve as a very active agent for the President’s reelection during 1864 — and a useful go-between with Thurlow Weed. The New York Postmaster wrote Postmaster General Montgomery Blair in late March 1864 — a letter which was read by President Lincoln:

I returned from Albany last evening Our State Committee met there on Wednesday A strong effort was made to induce the Committee to pass a resolution requesting the National Committee to reconsider the time for the meeting of the National Convention until September next-
This was passed by the Fremont men and all others opposed to Mr. Lincoln, and was with difficulty prevented[.] It resulted, however, not only in their not passing any such resolution, but I succeeded in inducing the Committees to sign an autograph letter addressed to the President, pledging him their continued support &c &c.
This was signed by every member of the committee present and will be speedily forwarded to the President
I deemed this something accomplished in the right direction
The Legislature are reluctant to act, yet I have commenced an effort which I think will result favorably- 4

Your excellent letter was duly received I have read it with proper explanations to Mr B. He said, after some moments of silence, that so far as it related to him, “it did not amount to much”-
I supposed, if anything was written, something more specific would be expected However, I hope to avoid the writing of any thing further Should it be deemed necessary I will indicate my views as to its form, personally, as I expect to be in Washington next week I have ventured to show this letter to several of my our freinds [sic] (of course without indicating a word as to what drew it out) and it has met with universal approval
A word upon our other matter I am fearful our hold upon Mr [Thurlow] Weed is slight He evidently has his eye upon some other probable candidate[.] I deeply regret this, for against him it will be difficult to carry New York Now I don’t know, precisely, what he asked when he last saw you, but I think, so far as I could without compromising principle, I would yield to his wishes[.] Cant this be done? If so, it should be, at once
Daily cogitations are occuring [sic] and new alliances may be formed I think this requires instant attention
Again, much anxiety exists as to the effect of the draft Men must be had
Cant they be obtained in some other way? Let me suggest Genl [Daniel] Sickles is idle[.] He is immensely popular with the war people of this State[.] He has great tact & address[.] I am of the opinion, with proper appliances, he could raise fifty thousand men in this State before election[.] This would be a great point[.] But, politically, he would be ranked with us, and in this he could be of immense service You could fix this easily by a personal interview-6