This Ticket Good for a Free Passage up Salt River

How Columbia Receives McClellan’s Salutation from the Chicago Platform 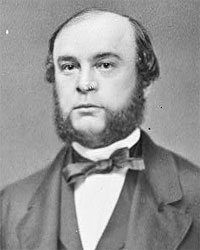 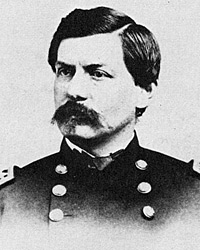 To block the program of Vallandigham, on the one hand, and the nomination of McClellan, on the other, he had nothing more than his own prestige and the name of Samuel Nelson. As the obvious leader of the Constitutional opposition to the policies of the radical Republicans Seymour was a person of importance and promise. He might easily have managed his own nomination; that he was unwilling to do so is proved first, by his going to the convention as a delegate, and second, by his acceptance of the permanent chairmanship. His journey into the West was marked with a series of ovations at every stop, and “especially at Detroit, crowds, cheers, speeches, and salvos of firearms greeted him.”13

Just as New Yorkers had played the leading roles at the Republican National Convention in June, New Yorkers played the key roles at the Democratic Convention — National Chairman August Belmont, Convention chairman Horatio Seymour, McClellan strategists Samuel L. M. Barlow and Manton Marble
Mitchell wrote that when Seymour “went up to take his place as presiding officer of the convention, a storm of cheers followed him from the floor. Not only could he have headed the ticket if he had been willing, but, what is more important still, he might have written the platform. Defeat in the assembly elections of 1863 and the stubborn accusation that he was working all the while for himself in 1864 seem to have made him the victim of his own indecision.”14
McClellan’s path to the nomination was impeded by two forces — Peace Democrats led by Ohio’s Clement Vallandigham and the potential presidential candidacy of New York’s own Governor Horatio Seymour. Historian William Frank Zornow wrote: “The launching of the Seymour boom at the preconvention caucuses was largely the work of Fernando Wood. Seymour had no great affection for the New York Copperhead leader or for the cause he represented, but he made no effort to prevent the use of his name by men whom he despised. Wood probably had no interest in Seymour, but was using him largely to kill off McClellan’s chances. During the convention Wood was alleged to have remarked, ‘I don’t care five cents for Seymour: he is only a convenient tool just now.’ There were high hopes among anti-McClellan men that New York might be induced to give a complimentary vote for Seymour on the first ballot and thereby prevent the General from receiving the two-thirds vote necessary for nomination. Many delegates from Ohio were also actively working to induce others at the convention to cast a complimentary vote for Seymour.”15
Historian Sidney David Brummer wrote: “About a week before the delegates gathered in Chicago, the [Albany] Argus came out with an authoritative announcement that Governor Seymour would not be a candidate for the presidency. Yet, when the convention met, the peace men led by the two Woods revived the talk of naming Seymour with the intention probably of using him to kill of McClellan. Around the hotels the anti-McClellanites talked much, and betting by outsiders that McClellan would not be nominated was lively. Dean Richmond, however, was firm for the General, and a majority of the New York delegation was for him. On Saturday, August 27th, the delegation was for him.”16 When Amasa J. Parker cast New York’s votes for President, he expressed regret for New York State “passing by her favorite son, who disclaims the candidacy.”17 During a lull in the convention proceedings, Governor Seymour delivered a brief speech:

Some gentlemen have done me the honor to present my name in connection with the office of President of these United States. It would be affectation on my part to say that these evidences of regard did not give me great pleasure; but many months since I announced my friends in the State of New York that I could not, for reasons of both public and private character, be a candidate for that high office. Having thus advised life-long friends of my purposes, those to whom I have been under so many great and enduring obligations, it would not be honorable on my part to allow my name to be brought forward under circumstances of apparent antagonism to them, when their views and commitments led them in another direction. [Cheers.] As a member of the New York delegation, I thought it would be advisable to place in nomination for the Presidency, an eminent jurist of that State. [Cheers.] I was led to that conclusion, not by any doubt of the ability and patriotism of General McClellan, or from any want of regard for his person or character, for I cherish a warm attachment for both. I know from his declaration to myself and others that it would be more agreeable to him to resume his connection with the army of his country, than to occupy the Presidential chair; but the wishes of the people have decided that it should be otherwise. [Applause.]
I wish to say a few words with regard to the objections which have been urged against his nomination, and which have caused some excitement in this convention. I speak more particularly of the objections urged by the delegation from Maryland. I did to one of its members an act of injustice by a decision, because I did not understand the purport of his remarks. It is due to him, that I should say, that I am confident that he never meant to take part in the proceedings of this body, without submitting in an honorable manner to its decisions. [Cheers.] With respect to the orders issued by General McClellan affecting the citizens of that State, I must say that I do not approve of them; but they must not be viewed in the light which events have since thrown upon the policy of the administration. At that time the wisest and best men of our country had confidence in its purposes. Then, the President denounced measures which he has since adopted; then the friends of the Union in the border States were listened to by him, with every appearance of respect and deference. The mask had not been thrown off, and obedience to his orders did not imply hostility to the rights of States. We must bear in mind how at that moment the public was convulsed by a condition of affairs without precedent, and by questions which were suddenly forced upon the public attention, and with regard to which, public men were compelled to act without time for reflection. What man can say after looking back over his own action during the past three years, that he had not fallen into many and grave errors with respect to his duty? God knows, I cannot, after reviewing my own official conduct, which was ever governed with an earnest and prayerful desire to do what was right. [Cheers.] I cannot say that all my official action has been such, as at this time to commend itself as at this time to commend itself even to my own approval.18