Visit to Albany and Niagara Falls 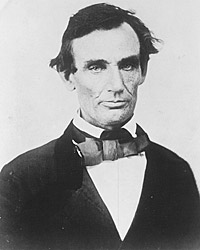 The rapids of Niagara 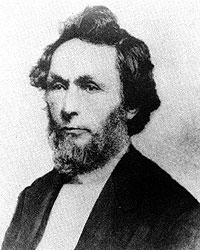 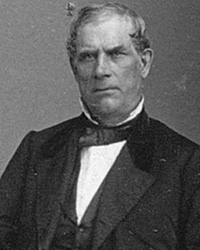 On September 9, 1848, Congressman Lincoln left Washington for a speaking tour of New England on behalf of Whig candidates. Little is known of his trip until he arrived in Worcester, Massachusetts, on September 12, but he undoubtedly arrived in New York City by train. He spent the next two weeks campaigning in the Bay State. Mr. Lincoln arrived in Albany about September 26 where he conferred with Whig political leader Thurlow Weed, who was editor of the Albany Evening Journal. According to biographer Carl Sandburg, “together they visited Millard Fillmore, Whig candidate for Vice-President.”1
Mr. Lincoln returned to Illinois via Buffalo and Niagara Falls. William H. Herndon later wrote: “It happened that, some time after, I went to New York and also returned by way of Niagara Falls. In the office, a few days after my return, I was endeavoring to entertain my partner with an account of my trip, and among other things described the Falls. In the attempt I indulged in a good deal of imagery. As I warmed up with the subject my descriptive powers expanded accordingly. The mad rush of water, the roar, the rapids, and the rainbow furnished me with an abundance of material for a stirring and impressive picture. The recollection of the gigantic and awe-inspiring scene stimulated my exuberant powers to the highest pitch.”2
Herndon then asked Mr. Lincoln: “What made the deepest impression on you when you stood in the presence of the great natural wonder?” Herndon wrote: “I shall never forget his answer, because it in a very characteristic way illustrates how he looked at everything. ‘The thing that struck me most forcibly when I saw the Falls was, where in the world did all that water come from?” Herndon concluded that Mr. Lincoln “had no eye for the magnificence and grandeur of the scene, for the rapids, the mist, the angry waters, and the roar of the whirlpool, but his mind, working in its accustomed channel, heedless of beauty or awe, followed irresistibly back to the first cause.”3
Others have suggested that the ever-earnest Herndon simply didn’t appreciate Mr. Lincoln’s sense of humor. After all, President Lincoln was later the man who said after the fall of Vicksburg, the last confederate fortress on the Mississippi River, that the “Father of Waters again goes unvexed to the sea.”4 Mr. Lincoln was sufficiently impressed that he took some notes — perhaps as the basis for a future lecture. The notes break off abruptly with an incomplete sentence:

Niagara-Falls! By what mysterious power is it that millions and millions, are drawn from all parts of the world, to gaze upon Niagara Falls? There is no mystery about the thing itself. Every effect is just as any intelligent man knowing the causes, would anticipate, without [seeing] it. If the water moving onward in a great river, reaches a point where there is a perpendicular job, of a hundred feet in descent, in the bottom of the river, — it is plain the water will have a violent and continuous plunge at that point. It is also plain the water, thus plunging, will foam, and roar, and send up a mist, continuously, in which last, during sunshine, there will be perpetual rain-bows. The mere physical of Niagara Falls is only this. Yet this is really a very small part of that world’s wonder. It’s power to excite reflection, and emotion, is it’s great charm. The geologist will demonstrate that the plunge, or fall, was once at Lake Ontario, and has worn it’s [sic] way back to it’s [sic] present position; he will ascertain how fast it is wearing now, and so get a basis for determining how long it has been wearing back from Lake Ontario, and finally demonstrate by it that this world is at least fourteen thousand years old. A philosopher of a slightly different turn will say Niagara Falls is only the lip of the basin out of which pours all the surplus water which rains down on two or three hundred thousand square miles of the earth’s surface. He will estim[ate with] approximate accuracy, that five hundred thousand [to]ns of water, falls with it’s full weight, a distance of a hundred feet each minute — thus exerting a force equal to the lifting of the same weight,, through the same space, in the same time. And then the further reflection comes that this vast amount of water, constantly pouring down, is supplied by an equal amount constantly lifted up, by the sun; and still he says, “If this much is lifted up, for this one space of two or three hundred thousand square miles, an equal amount must be lifted for every other equal space; and he is overwhelmed in the contemplation of the vast power the sun is constantly exerting in quiet, noiseless opperation [sic] of lifting water up to be drained down again.
But still there is more. It calls up the indefinite past. When Columbus first sought this continent — when Christ suffered on the cross — when Moses led Israel through the Red-Sea — nay, even when Adam first came from the hand of his Maker — then as now, Niagara was roaring here. The eyes of that species of extinct giants, whose bones fill the mounds of America, have gazed on Niagara, as ours do now. Co[n]temporary with the whole race of men, and older than the first man, Niagara is strong, and fresh to-day as ten thousand years ago. The Mammoth and Mastadon — now so long dead, that fragments of their monstrous bones, alone testify, that they ever lived, have gazed on Niagara. In that long — long time, never still for a single moment. Never dried, never froze, never slept, never rested, [Unfinished].5

Clearly, Niagara’s impression on Mr. Lincoln had not evaporated quickly. From Buffalo, Mr. Lincoln — who had been joined along the way by his wife — returned to Illinois aboard the steamer Globe — landing in Chicago on October 5.
Footnotes